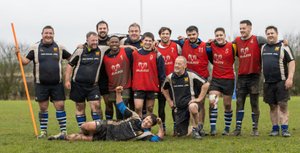 Rugby and charity the winners

A good time had by all

St. Ives Rugby fought off wind, rain and pandemic concerns to ensure the first Overs v Unders charity fixture was played since 2019.
As is tradition, the Overs had the advantage of slope and tide and reached half time within a score of their fleet footed opponents. Evergreen Jason Price had dived to slide in from at least 10 metres (at least that’s how far it was with beer in hand later).
Craig Cheetham, aided by stand-off Josh Dear and scrum half Adam Scott, drove over for his first try in an Ives shirt for at least eight years.
Returning students Fin Ruddock and George Peacock enjoyed testing themselves, scampe