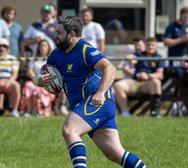 Fun in the sun as rugby returns to the Chicken Shack

St. Ives welcomed Cambridge 2s to Somersham Road for an end of season friendly – the first serious rugby for either set of players since March 2020.
Keeping to all current restrictions did not lessen the atmosphere for the many supporters who heard wind of the fixture, which was not advertised. The warm weather meant the beer runners were heavily employed to the tables throughout!
With the sun beating down, the pitch firm underfoot and the amended laws dictating no scrums or mauls, the match was always going to be fast. Both sides had pre-agreed to field “normal” XVs, so the opportunity for the big men to enjoy the return was just as high as the fleet footed backs.
Given the enforced hiatus, the skill levels and impacts on display by both sides were extraordinary.
From the off, the Ives front 5 was eager for the ball and carried hard. The younger Cambridge side was initially shell shocked with the collisions, but defended well.
The pattern of the game was set as both sides looked to move the ball fast and involve the outside backs. The defence of both teams was also tough and uncompromising.
There were great performances throughout the Ives squad, especially that front 5. Special mention also for debutants Oli Watts, Freddie Clark, Jason Chamberlain, Mike Brennan, Ash Dallimore, Henri Cherrington, Richard Bannister and Phil Shire who all illustrated that the Club squad strength has improved significantly.
Competitive throughout, the teams scored three tries apiece, the result being decided by Cambridge slotting home an extra conversion.
Head Coach Max Dominy was very pleased with the run out. “We are on a new journey and have given ourselves a marker in where we are in our development. As a group we made a really positive step forward, and I am excited to see where we can go. It is clear to see the areas that still need some work, but the standards the players are bringing every week has increased significantly, and that was clear to see in the improvement of performance yesterday.”
Chairman Ross Thompson was delighted with the day. “It was so good to see people back at the Club enjoying the rugby both on and off the field. We look forward to welcoming them all again when we start the 2021/22 season.”
St. Ives try scorers were Ollie Bartlett, Freddie Clark and Michael Wright, a conversion added by Alex Henly.
The Club takes a break for a few weeks before returning to training in July and an exciting run of pre-season fixtures in August.
Share via
FacebookTwitter
https://www.pitchero.com/clubs
Recent news