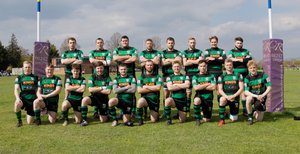 Senior men are recruiting for 2019/20 season

St Mary’s looking to recruit and build on last season

St Mary's Old Boys Rugby Club have secured the coaching skills of Kevin Powderly for a further two seasons, after he took over the reins at the Gloucester Premier side last summer.

Powderly has vast coaching experience with 34 years under his belt. He is a highly qualified coach who has achieved great success with every team he has worked with.

With five years’ coaching experience of a top flight rugby at Gloucester and holding the position of Director of Coaching at high profile clubs such as London Scottish, Hartpury Rugby and Taunton, as well as experience coaching in Fiji, New Zealand, Samoa and South Africa, Kevin’s decision to commit to a further two years is great news for the club.

“I see a lot of potential within the squad, we have some very talented youngsters who have recently made the step up to senior rugby and featured heavily in the First XV last season, adding to that, the more senior players who have great experience at this level, I can see the future being bright at the club.

Andy Plummer had an excellent season last year and has been rewarded with the role of first team captain with Tom Moore being elected as vice-captain. This coming season, we are looking to strengthen the squad with players who want to fulfil their potential and enjoy success by training hard and playing expansive rugby.

Behind the scenes there is great nucleus of ex-players in Paul Dagger, Simon Gait, Andy Lathrope and Mark James who work tirelessly to give the players a lot of support, along with a first class physio who is available training nights and match days.

The club has five playing pitches, two of which have floodlights, which is great for training and playing evening matches and there is also a well-equipped gym.

We also have a social committee ensuring the players enjoy themselves off the pitch with regular after match functions as well as an end of season tour, which we are hoping will be overseas.

With the club running three senior sides last season and hoping to get four sides out on occasions in the coming season, we welcome any players that want to further their rugby and benefit from good quality coaching in the Bristol area. We train twice a week with games every Saturday.”

Training is at Northwood Park, Trench Lane (BS36 1RY) on Tuesdays and Thursdays 18.45 - 20.30 with pre-season starting on Tuesday 25th June. Prior to this there are friendly, touch rugby sessions running every Tuesday in June.

Come along and join us.