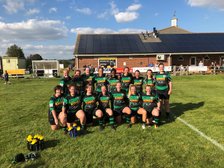 St Marys Ladies got their defence of the league title underway with trip to Devizes, where they had finished last season's campaign and came away with an excellent 5 points. Mary's had a boat load unavailable for this week and so only travelled with a bare 15, 3 of whom were making their first starts for the club. Boiling hot day not helping and a really tough test on the cards. Pretty even start with both defences being tested by some strong carries in the midfield until a little bit of class from winger Laura McGlone who picked up a loose ball, chipped into space and won the foot race to dot down in the corner. 0-5. Fairly even contest for the next 20 mins with Marys looking dangerous out wide and Devizes creating chances through some outstanding running from their No12. The home side were knocking but when Marys moved the ball away they looked really good going through the phases before some great hands by the backline put Lianne Everett away for a debut try in the corner. 0-10 but more concerning for the home side was the loss of their 12 following her attempt to stop the try and this would have a real impact on their game. Marys were on top now and more direct carrying by the pack and slick hands out wide saw skipper Chloe Tucker score 8 minutes later before a second debutant, Ann Webb, intercepted on half way and raced clear. She was caught by some great cover defence but coolly popped the ball up in the tackle for the supporting Jade Gamlin to score and convert her own try under the sticks. Half time 0-22 and a reinforcement had arrived from work in the shape of Danielle Hand. She replaced the excellent Steph Hyde and Marys got underway. 3 minutes gone and a lineout from close range saw the pack drive superbly over the line for flanker Michaela Excell to score her fist ever try for St Marys and stretch the lead to 0-27. The game then became a bit stop start with a lot of injuries and this effected to flow. However St Marys looked to boss the game from here and they were a constant threat. Jade Gamlin picked up her second try when she went on the charge breaking a few tackles to score and convert for a 0-34 lead, before Laura McGlone added her second following more great work from the forwards and excellent finishing from the backs. Final score 0-39. This was a real test for Marys who had to put in a really strong performance to keep out a really strong Devizes side. The home were hampered by a series of injuries, notably to their flanker who had to go to hospital and everyone at St Marys hopes she makes a speedy recovery and passes on their best wishes. The game itself was really keenly contested and played in the right spirit, helped by an excellent referee, which made for a really enjoyable fixture. We really look forward to the return.
For Marys some vey strong performances particularly in the pack from debutant Rosie Quin, Sarah Wright who had her best game Ive seen for St Marys and the excellent Emily Robson who was double hard. In the backs Sophie Williams was superb at scrum half whilst Danni Rigby and Laura McGlone both had great games. Everyone deserves a pat on the back for their efforts, but the outstanding performance was by flanker Sarah Barker who despite playing in bubble wrap, was a constant menace at the breakdown and made 4 brilliant turnovers.
Next up is our first home game against Topsham who got off to a flier at the weekend. Please get along and support if you can.
Share via
FacebookTwitter
https://www.pitchero.com/clubs
Recent news