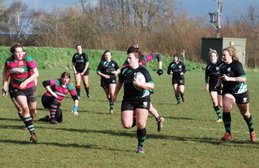 3 In A Week Starts With Win

Mary's started what will be 3 games in a week with the return fixture at Westbury on Sunday. With the Westbury pitch waterlogged, the fixture was switched the great facilities at Trowbridge RFC and we even managed to book some sunshine for the game.

Mary's knew that only a 5 point return would keep their slight title hopes alive and they started really well. As is Mary's way, they moved the ball well to the width and after 6 minutes centre Ginny Troughton coasted in for a try on the outside. This was to be the theme for the majority of the first half as Marys looked to utilise their pace, not least through new found winger Kathryn Howells, who had an amazing first half scoring 4 tries. Kathryn's haul was split by two brilliant breaks from SMOBLs forwards, which saw both Fern Read and Victoria Shakspeare run in from inside their own half, and captain Chloe Tucker who weaved her way to an excellent individual try. With regular kicker Gambo away playing cricket (???), the kicking duties were left to fly half Danielle Rigby who slotted 7 of Mary's 8 first half tries, and at the break they led 0-54.

Second half and Westbury were on top from the start. Some really good carries, most notably from their no8, saw them gain good field position, and from a catch and drive they were only stopped from scoring through a brilliant tackle on the line from Chloe Tucker. Mary's then turned the ball over and broke away, where the pace of winger Lianne Everett was too much and she raced in from 60m. The second half on the whole was much more competitive, but Marys were able to take advantage with turnovers and good width where they were a constant threat.

Further tries were added by Ginny Troughton and Danielle Rigby, before Lianne Everett scored with the final play. Danielle Rigby converted all bar one (because the kicking tee runner was having a fag), and the final score was 0-80. Westbury deserve huge credit for their never say die attitude. They have been an absolute pleasure to play against and we wish them all the best for the remainder of the season. For Mary's its 1 down 2 to go. It was a really good all round shift, but still lots for us to improve on. Notable performances this week from Sarah Wray, Michaela Excell and Jess Cogan, who were all excellent in both attack and defence. However, special well dones to players player Victoria Shakspeare, whose work rate was outstanding, and coaches player Kathryn Howells who rounded off a brilliant week at training with a fantastic performance in her first start for the club.

Next up is an away trip to North Petherton on Wednesday evening. Kick off is 1930. Your support would be greatly appreciated.