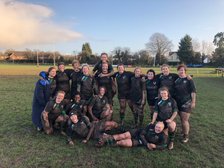 Mary's Back to Best

Mary's travelled to Topsham this week for their first reverse fixture of the season. Short on numbers this week and with the heavens opening just as kick off arrived the visitors knew it would be a strong test against a much improved Topsham side. With the wind behind them Mary's wanted to dominate territory and they got off to a flyer. Strong work by the pack great hands in the conditions, Chloe Tucker in the corner after 3 minutes. 5 minutes later same again and this time it was Laura McGlone who dotted down in the same corner. Kicks pretty much impossible, even for Gambo, so tries the order of the day. On 15 minutes it was Dannielle Rigby who finished off more superb work by the forwards which led to a big overlap. Weather conditions so bad now she nearly carried on going over the dead ball, but all safe in the end. Topsham then got themselves on the front foot with some strong carries of their own, but Mary's were dominating the gain line and putting in great tackles. Turnovers hard to come by with the slippery ball and things went quiet for 20 minutes. Then some great skill from Rigby who grubbered through a determined defence and Topsham old girl Ann Webb got to the ball first to score. Just before half time Mary's picked up a bonus point when a good kick chase, tackle and outstanding clear out by captain Chloe tucker allowed Laura McGlone to pick up and trot in unopposed. Half time 0-25. Second half and Mary's off to another flyer. Everyone showing great hands to move the ball from edge to edge before Ginny Troughton gave the scoring pass to fellow back rower Boe Meaton to cross in the corner for a fantastic team try. Another 20 minutes of grit followed as both sides had their moments only for combinations of great defence and terrible conditions stopping further tries. 15 minutes left and Mary's centre Jade Gamlin crashed through in typical style for a great try, which she converted (always kicks her own.) then with 10 to go the pack put in a fantastic set of scrums to firstly gain ground and then put in an outstanding drive leading to their own 5m put in. Everyone expecting another huge surge so Boe picked up and carried over for Mary's 8th of the day. Gambo in the zone with the kick and the final score was 0-44. Topsham were much improved form the sides first meeting and battled rally hard in the weather. Mary's were jus able to move the ball and that made all the difference. Fantastic set up and a great group of ladies. We'd love to play again anytime.
For Mary's it was a great result. Two focus points set out beforehand and both ticked off in classy fashion. Everyone gets a huge pat on the back this week but special mentions to the front row who interchanged really well throughout, Ginny Troughton and Sarah Wray who moved between flanker and centre excellently, half backs Laura and Danni who both continue to impress and Rosie Quin who made the most ridiculous squeak in the clubhouse after, chopped 4 pints and then realised her car was at the clubhouse. Players Player was Boe Meaton who is in outstanding form at the moment and Coach's was Ann Webb who has worked really hard on her tackling in open space and put in two crackers on Topsham's superb 15. Next up for Mary's in Portsmouth in the cup this Sunday.
Share via
FacebookTwitter
https://www.pitchero.com/clubs
Recent news