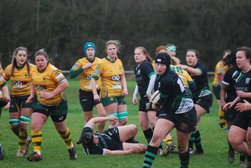 St Mary’s opened 2020 with a home fixture against Plymstock, having drawn with their opponents last time out. Mary’s welcomed debutants Tori Gillmartin and Milly O’Donnell into a strong squad despite a couple of late withdrawals and everyone looked keen to burn off the pigs in blankets (or vegetarian option where available.) Kick off and both sides looked to impose themselves. The home side got the better of the early exchanges and moved the ball well to the width where full back Ann Webb ran a great line before putting skipper Chloe Tucker away to cross in the corner. Plymstock then came back strongly and both sides were really well matched. Mary’s looked dangerous when they moved the ball but struggled to keep their width and chances were lost. Then as we approached the half hour mark, Mary’s ran an excellent strike move from a set piece and Chloe Tucker raced away for her second try. Conversion added by Jade Gamlin, who was finally getting a run out at No8, and Mary’s led 12-0. Back came Plymstock and they had their best period of the match putting the home side under pressure with some strong carries, notably by their impressive full back who was a constant threat. Under pressure inside their own 22, Mary’s then turned defence into attack following a great clear out from Ann Webb. New found centre Ginny Troughton picked up the loose ball and popped to fly half Danielle Rigby who set off on a 75m run where she stepped the full back, threw up a dozen quality street and half a Christmas pudding before crossing for a great counter attack try. Half time 17-0. Second half and the home side had a couple of work ons which they set about implementing immediately. Strong carries and good hands creating opportunities and Jade Gamlin popped up in the midfield to cross and convert her own try on 48 minutes. 24-0. In the final quarter Mary’s really impressed with some great rugby. The visitors picked up a couple of injuries to important players but kept working hard as Mary’s went in search of a bonus point. That came on 63 minutes when the pack picked up a meat pie from an excellent push over try (front row players need to bake a cake to celebrate.) 3 minutes later more pressure and more good handling saw Ginny Troughton score under the posts as gaps appeared and Gambo converted; 31-0. Then in the final 5 minutes Mary’s put the icing on the cake when Sarah Cronk smashed through and carried 30m before offloading to Gamlin. Ball then popped to Fern Read who continued the move and when she was dragged down and after a couple of good pick and goes, scrum half Tori Gillmartin nipped in around the fringes to score. Conversion added and time for one last move seeing the ball moved really well to the width where Laura McGlone was on hand to score a really well deserved try. Conversion added with the last kick of the game and 50 up for Mary’s. This was a really strong start to the year for Mary’s who put in a really good squad performance. Plymstock kept coming hard and were really strong throughout and we wish them all the best for the rest of the season. Pats on the backs across the board today for a good shift, but in particular Milly and Tori who had great debuts, Sarah Wray who has a really strong 80 and Sarah Cronk who had a really big game. Players Player and coaches player both went to Ann Webb who was outstanding in attack and defence and who continues to improve in her new role. Well done!!!
Mary’s are at home again next week against Westbury. Please show your support for the ladies and get along if you can.
Share via
FacebookTwitter
https://www.pitchero.com/clubs
Recent news