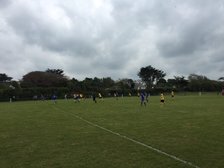 The anticipation was high at Trewint Lane as the league leaders from Pelynt arrived full of confidence hoping they could put behind them their disappoint following their exit from the Junior Cup last weekend. They also brought a great bunch of supporters who were a real credit to the club and helped create a great atmosphere and made plenty of use of Terry's Tea Hut.

The Saints were coming off an unbeaten run of 3 games and everyone was looking forward to a great game between 2 good footballing sides.

Pelynt made a fast start to the game and caused the Saints a few problems down the flanks, but the defence continued their brilliant form and allowed nothing to get past. Chris Andrews was only called in to action a couple of times. In the first 20 minutes Pelynt edged the game on possession and attacking intent, but we started to adapt to their game plan and assert ourself on the game.

On 25 minutes the game came alive when a breathtaking run from 16 year old midfielder Robbie Green started just inside Pelynt's half which he started inline with the right hand side of the 18 yard box and he ran diagonally beating a number of Pelynt defenders until he was inline with the left post when he let fly with the outside of his right boot and the ball flew in to the top left corner with the Pelynt keeper motionless. A moment of magic from a very promising youngster.

This gave the Saints plenty of confidence and we continued to be strong for the remainder of the half. Pelynt kept to their game plan but we were starting to dominate the attacking part of the game.

As we were getting ready for our half time talk we attacked down the right through Andrew Seymour, who worked himself in to a great position and then he fed the onrushing Robbie Green at exactly the right moment and Robbie made no mistake as he stroked home for 2-0.

The 2nd half started and Pelynt showed their intent and had a real go. On the hour mark they scored what we feared could be a game changing goal. We struggled to clear the ball effectively and the Pelynt player was on hand at the back post to stroke home unchallenged.

But straight from the kick off came the game defining moment. Young Robbie Green picked up the ball in the middle of the park and went on another mazy run through the heart of the Pelynt team until he finally knocked the ball around the last defender, ran around him and picked up the ball and stroked it home under the onrushing keeper. 2 moments of magic in 1 game and a hat-trick to celebrate. Quite a day for the young player.

The Pelynt players heads went down and a few moments later it got worst as the frustration that young Robbie Green had caused them all afternoon boiled to the surface when he was needlessly pushed in the box and Corey Cleave stroked home the penalty for an emphatic 4-1 scoreline.

Pelynt kept pushing forward but the rest of the game was played out and on the final whistle a very well deserved victory was celebrated against very good opponents.

Top performance's throughout the team today as our hard work principles are really coming to the fore now. Chris Andrew's set a great foundation for us with another confident performance. Full back's Daniel Cox and Dan Colwill were solid again, until Colesy pulled up with a strain and was admirably replaced by Richard Simmons. Dayll Beesley and Sam Cleave continued their dominant partnership in the centre of our defence. Every time they were called upon they delivered the goods in style. The holding pair of Ted Meagor and Ben Beesley have made a real difference giving us a solid platform and both were outstanding again today, perhaps Ted's best performance since he joined us in the summer? Wide players Steve Wootton and Corey Cleave worked tirelessly and it was great to see Corey returning to near match fit after his horrible pre season injury. David Mullis came on with 20 to go to bring his intelligent brand of football to steady the midfield and see us home. Andrew Seymour worked none stop upfront and caused problems for the Pelynt defence all afternoon (still can't believe he let Corey have the pen!). We were also able to protect Callum Wilson's injured foot today. Last and not least, young Robbie Green's performance for a 16 year old was incredible and it was a pleasure to say I was there the day he scored 2 worldy's, a deserved hat-trick and lifted the Sharp's Brewery Man of the Match performance.

Finally, it was a real pleasure to see such a competitive game played in such a good spirit by both sides with supporters from both sides a real credit to both clubs.

Next week sees us visiting Lostwithiel.