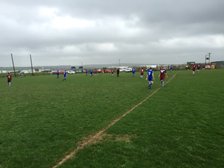 Saints win 8th game on the bounce in horrific conditions at St Mawgan with battling performance in game of 2 halves due to very strong winds.

It is always a challenge for teams during the festive period of the year as players have their work's Christmas parties, etc... So the squad was very thin this week with young Ed Green being called in during the morning to bolster things as players dropped out.

Add to that very strong winds at Trevarrian Holiday Park and we knew we were in for a character testing game. It would mean digging in when defending up the hill and maximising the benefit of the wind and the slope. The toss today would be very important.

During our warm up we were treated to the pilots skills of a Dash aircraft as it approached Newquay Airport. The pilot was almost flying the plane sideways to counter the very strong headwinds, but landed it beautifully.

The toss-up took place and resulted in us having to defend against the wind and slope in the first half. We had recently beaten St Mawgan 5-1 and 11-2 and it was great to see them give it a real go believing the elements would benefit them in the first half and it would be a matter of how much of a lead they had managed to build by half time and if they could defend it in the 2nd.

5 minutes in and a real game changing moment happened. St Mawgan were awarded a penalty, which psychologically could have been a real positive for St Mawgan and negative for us. Fortunately Chris Andrews made a brilliant double save to keep the scores level. He initially dived low to his left to parry the spot kick and then reacted brilliantly to also block the follow up shot, turning it away for a corner. This moment alone earned him his Man of the Match award. We also need to ensure when we defend penalties we follow up the initial shot to give Chris some support.

We didn't seem to learn from our penalty indiscretion as we conceded an indirect free kick in the box. Again we defended brilliantly to ensure St Mawgan were only awarded a corner from the resulting free kick.

From every attack we were clearing our lines as far as we could in the strong winds but were constantly under pressure from a marauding home team. Eventually our resistance broke as St Mawgan swung in a free-kick/corner from our right back position. They won the first header and the follow up header to finish well. Disappointing that we lost both headers but nothing more than St Mawgan deserved for their onslaught.

It was after this that we started to come to terms with the conditions and managed to keep possession more intelligently and saw out the remainder of the half only 1-0 down.

Tactically nothing was changed at half time as we were very proud of what we had managed to achieve to contain the score to only 1-0. Obviously this half we should have a lot more attacking possession and just wanted to ensure we worked hard to obtain a result.

It took us 15 minutes to get ourselves back in to the game when Steve Wootton picked the ball up on the right hand side of the box and let fly with a right foot rocket across the stranded keeper in to the top left of the net. This moment physiologically changed the dynamic of the game for both sides. Our lads now believing that recent results and confidence should ensure a positive outcome. The opposite effect on the St Mawgan team was evident.

Tactically we changed a few things to bring on some fresh legs and mix it up a bit. Ed Green replaced his twin brother Robbie Green on the right side of midfield and then we switched Steve Wootton to the left with Corey Cleave moving to left back.

This change provided Steve Wootton a bit more space and freedom to operate in and he excelled with his 2nd goal of the game, a beauty hit low from the left of the box across the keeper in to the right hand side of the net for 1-2.

A couple more changes, one forced and a couple tactical saw Sam Cleave have to come off with a slight twinge and Robbie Green being moved up top to support hard working Andrew Seymour. This change paid dividends almost immediately as Robbie Green picked up the ball centrally, ran at the St Mawgan defence and lobbed the keeper with a worldy chip in difficult conditions.

That was game set and match and a very satisfying afternoon's work in very difficult conditions and I was left very proud of how hard we had battled in the first half to give ourselves a chance of a positive result. This type of performance is welcomed as we won't be able to win all our matches playing in "Barcelona style".

Today's 3 points keep us on top of the league entering the Christmas and New Year break. Our next game is on 2nd January with a tough away fixture at Saltash.

In the meantime, we wish you all a very happy Christmas and New Year and see you all in 2016.