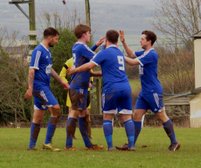 As we welcomed Mark Menhinick to the club, Saints come out on top against battling young St Dominick side in one of the few games played this weekend.

After the recent horrific weather it was hats off to St Dominick for managing to make this game possible. The conditions were sticky but not too bad at all considering the weather overnight.

We were delighted to welcome Mark Menhinick to the club today as assistant manager to Dave and Ben. His infectious personality and vast football knowledge were on show from the start during our warm up and from the touchline and know he will be a massive asset for us as we aim to achieve our goals over the coming seasons.

Due to various reasons we were missing 4 key players from our starting line up v Biscovey. Luckily enough we were able to turn to Nick Hurst and Leighton Carhart to help fill 2 of the places, but we were still 2 men down. As the 2nd team's match fell to the elements at Gorran we were delighted to welcome 3 of their younger players to help boost the squad.

From the kick off we started like a house on fire and moved the ball around very quickly, but unfortunately were unable to find the clinical finish our approach play deserved. At the same time the young St Dominick team made it very difficult for us to break them down.

The breakthrough eventually came on 35 minutes when a corner from the bottom side was met by skipper Dayll Beesley for 0-1.

This opened the game up but we were unable to capitalise again before half time.

A god chat at half time and some subtle tactical changes saw us start the 2nd half in fine form moving the ball around at pace again.

Football matches can change on moments and in the 50th minute we saw one such example. The ever battling St Dominick skipper hit a screamer from about 30 yards and it flew past the despairing Chris Andrews in goal but luckily for us cannoned back off the top of the bar/post intersection. We picked up the loose ball, fed Ryan Pooley wide left and he cut in, took a chance and fired in a shot that eluded the dive of the home keeper and we were 0-2 up. It could have easily been 1-1 moments before but this gave us breathing space and from then on the game opened up.

2 minutes later from a Saints attack the ball fell to Callum Wilson, after the keeper saved, and he made no mistake from close range for 0-3.

Queue the opportunity to get our subs involved and we made a number of changes bringing on the very promising Ed Green and Dan Colwill for Daniel Cox and Callum Wilson respectively. Closely followed by Richard Simmons on for Steve Wootton and Mike Green for Ben Beesley.

Mike Green's impact was immediate as he met a corner "Robert Huth" like as he lofted a header high and beyond the keeper for 0-4.

The last 10 minutes were made for Man of the Match Corey Cleave. After an awesome performance at left back we were able to move him forwards in to his preferred midfield position and he firstly converted a penalty calmly and then finished off team goal of the game with a calm finish past the advancing keeper for 0-6.

Next weekend sees us in home action versus our old rivals Foxhole and then it is the Junior Cup semi final versus Callington 3rds under lights at Wadebridge Town on Wednesday 24th February. Exciting times for the club.