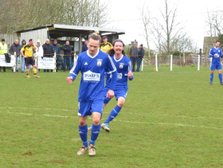 Cracking 3-1 away victory at battling Pelynt as we welcome newcomers James Heywood and Ashley Richards.

Minver travelled to Pelynt a few changes to the squad from last time out at home to Saltash: Stuart Parkyn, Ben Beesley and Steve Wootton all returning to the starting 11, whilst two new signings, James Heywood and Ashley Richards started on the bench.

St Minver started the brighter and deservedly took the lead inside the opening 10 minutes. Corey Cleave cut in purposefully from the right hand side, and the Winger's well timed reverse ball set Robbie Green away to finish neatly underneath the keeper. It could have been two just a minute later, as Ryan Pooley controlled Daniel Cox's pass brilliantly, only to see his lob bounce inches wide of the target.

The home side responded, and got themselves back into the game, but good defending from Dayll Beesley and in particular Stuart Parkyn who was dominant all afternoon, made it incredibly difficult for the hosts to carve out any real chances. There was a constant threat from the away side on the counter attack, with the pace that the front four possessed.

Just after the 20 minute mark, a trademark Corey Cleave crossfield pass found Robbie Green beautifully, who burst in to the penalty area, and squared unselfishly for Ryan Pooley to tap home.

St.Minver were well in control at this stage, and a neat move between Ben Beesley, Steve Wootton and Robbie Green lead to Corey Cleave firing just wide from a tight angle just inside the box. The half - time whistle blew with St.Minver looking good value for their 2 goal advantage.

The visitors picked off where they left off in the second half, with a powerful run from Corey Cleave down the left leading to his drilled cross across the 6 yard box just out of reach for Pooley. Corey Cleave seemed to be St.Minver's main threat down the left hand side, as he latched on to a good ball from Sam Cleave to sprint to the byline, and cut a great ball back across the box, which Robbie Green was unfortunate with his effort on the stretch. Corey Cleave was again involved seconds later, as he teed up Pooley on the edge of the area, who's powerful strike cracked the bar.

With Wednesday nights Cup Semi-Final in the back of the visitors mind, Matthew Cleave as well as debutants James Heywood and Ashley Richards were introduced for the final 25 minutes.

It took the away side a few minutes to adjust, which with 15 minutes to go Pelynt took full advantage of. A flick on was well finished by the Pelynt striker from the edge of the area to make it 2-1 with a little over 15 minutes to go.

This was a wake up call for Minver, who probably should have put the game to bed before the visitors had struck. A good run down the right by Matthew Cleave eventually found its way to Ashley Richards, who's close range effort was well blocked by the home side's Goalkeeper.

In the dying embers of the game, a short corner routine between Corey Cleave and Robbie Green ended in Corey Cleave being up ended in the penalty area. Corey Cleave stepped up and fired the ball in to the bottom right hand corner to make it 1 - 3, and finish off a good afternoon for St.Minver.

This was great preparation for Wednesday nights cup semi final against Biscovey at Godolphin with a 7:00 kick off.