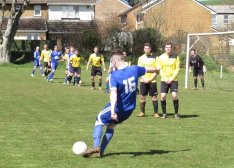 Another big 3 points as we come out victorious in the battle of the Saints with goals from Stuart Parkyn and Robbie Green.

This was always going to be a tough game as we came off the back of our midweek semi final victory with a number of key players unavailable due to injury, working or away and with St Stephen still smarting after their late defeat in last week's Junior Cup final.

Most of Friday evening was spent constructing a squad and to be fair we ended up with a pretty strong team.

After only 5 minutes the reborn Mike Kempthorne continued his recent unbelievable form turned inside on the left hand side and whipped in a killer ball splitting the 2 St Stephen centre backs and was met with a thumping header from Stuart Parkyn straight in to the top left bin for an awesome team goal and a brilliant start to the game for us.

The remainder of the half ebbed and flowed with us initially dominating following our early goal but as the half progressed St Stephen caused us more and more concerns but the defence stayed strong once again and just before half time another attack created by Mike Kempthorne threaded a ball over the middle of the defence which fell for Callum Wilson. He was unlucky with his lob which came back off the bar where goal scoring machine Robbie Green was on hand to blast home through the helpless keeper's legs as we reached the break 2-0 up.

We had a good chat at half time about what we needed to achieve. The half ebbed and flowed and we created a few good chances and St Stephen only brought Chris Andrews in to action right at the death as he tipped over a header that looked destined for the top corner.

The final whistle came and another great 3 points away at a strong side.

That concluded a great week as we returned maximum points from 2 tough away league games and also battled through to the final of the cup. 6 games left and we need to continue the grit and battle we are showing during tough games and display the quality we have throughout the squad when we have the ball. A week break now until next weekend for injuries to heal as we welcome Biscovey back to Trewint Lane.