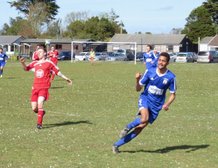 A tough game to have only 2 days before a cup final but an awesome performance leads to a deserved 2-0 victory versus tough opposition.

On a very sunny day with our Cup Final only 2 days away, this was always going to be a challenging game as the 3 points were so important to us whilst we wanted to be able to put out a fit team on the Monday.

With Ted Meagor working, Stuart Parkyn recovering from his knee operation and Ryan Pooley now playing cricket, what we had hoped would be a very strong squad to finish the season with was starting to test us with the cup final on Monday.

On a positive note, we welcomed back skipper Dayll Beesley after a few games out with a niggling injury and welcomed 2nd teamers Mike Green and Adrian Ashton plus Ashley Richards' 2nd appearance for the club. Matthew Cleave also made his first start for us in the middle of midfield (and what a move that turned out to be).

We started off on fire at a very high tempo and within 10 minutes took a deserved lead when a mistake by the Edgcumbe defender put Callum Wilson in and he made no mistake for 1-0.

We continued to play well whilst containing a good Edgcumbe side, who have pushed ourselves and Looe all season for the title.

Half time came and we made our first change as Robbie Green started to feel a slight pull and we didn't want to push him and lose him for Monday. We brought on the 2nd teams new striker Adrian Ashton for his 1st team debut.

Almost from the kick off we had a golden chance when the ball fell to Adrian Ashton, but unfortunately he couldn't apply the required finish.

After that the 2nd half ebbed and flowed with very few chances at either end. We continued to work very very hard in warm conditions and ended up using all our subs as one by one players had to be withdrawn with potential injuries that could have us struggling on Monday.

Amongst all of this Matthew Cleave in our central midfield ran and ran and battled and battled putting in a massive shift for us. This was matched by the whole team but his none stop running stood out in an excellent team performance.

On 80 minutes a brilliant cross field ball from Ashley Richards eluded the Edgcumbe right back and Adrian Ashton was in on goal. He composed himself and stroked the ball wide of the oncoming keeper in to the bottom right for 2-0.

Now we look forward to the Cup Final with Callington on Bank Holiday Monday at Lux Park, Liskeard with a 18:00. Hope to see you all there cheering us on :-)