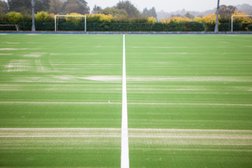 It was a bit of a mixed bag this week, with a good win for the ladies 1s, but a disappointing loss for the mens 1s. Ladies 2s cracked the Enigma code to win away and the men's 2s suffered a heavy defeat at Cambridge City. There was a tight win for the men's 3rds against St Ives and a big win for the men's 4ths against Ely City. Both teams are top of their leagues. The ladies 3rds lost against a good Nomads side, but put in some good performances and the 4ths won again to keep their amazing winning run going. The men's 5ths were cancelled, which was disappointing.

It seems like half the club is off to Cambridge next weekend - a good opportunity to get some Christmas shopping done - I'd like a new stick please!

Mike Hornby scored the only goal against a strong City side.
6th in the league. Play 5th placed Nomads 2s next week.

Two goals from Kevin Sequenza put St. Neots 2-0 up but goals either side of half time saw St. Ives back level.  Both sides had chances to take the lead, but it was St. Neots who finally won it with a well worked goal swept in by left half Gareth Thomas.  Thomas also took the man of the match award for some dynamic running play, but St. Neots were also very grateful to goalkeeper Simon Gautry who pulled off some fantastic saves to keep them ahead.  The team are now top of Division 5NW.
Play 3rd placed Cambridge City 6 next week.

Saints Ladies 1s recovered well from a poor, slow start after they fell behind to an early goal in their away game against near-neighbours Cambridge City III. By half-time they lead 3-1 through some excellent finishing by their forwards – Georgia Grant grabbing 2 goals and Saints player of the match Annie Cerveno adding a third. Cambridge came back in to the game with an early second half goal, but Saints sealed victory when Captain Alice Wright fired in a penalty corner to secure the points. In what is a very even and competitive league (East 2NW) Saints are now fifth, but are only 2 points behind the league leaders.
Play 11th placed Bourne Deeping next week.

Ladies 2nds won 4-0 away at Enigma

The ladies 3s put in a good performance against a strong nomads side.  Despit going 2-0 down in the first half, they were able to pull a goal back in the second and keep the scoreline respectable.  The goal came from youngster Cerys James who was also the man of the match.
8th in the league. Play 5th placed Cambridge City 5 next week