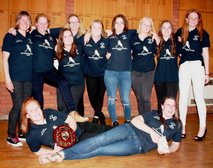 For anyone who missed out:
The games were competitive, but played in a very good, friendly spirit. Generally I think the form book was upheld and honours were even between the Ladies 1s and the mens vets!

Many thanks to JP (& family) for the barbecue and organising our umpires, Fiona for cakes and refreshments, ably assisted by Helen and also to our umpires themselves and Captains for organising their teams.

Regarding the dinner and awards we owe particular thanks to Mark Lincoln and our Chairman Iain Moor for organising and St Neots Golf Club for providing such a good venue. Also thanks to Hunt and Coombs Solicitors who generously sponsored the awards day and also came along to give out their new Club awards. We hope this is the beginning of a long mutually beneficial relationship!

I have some good photographs taken during the awards which I have circulated to your Captains.