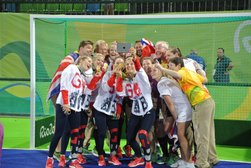 ..we found ourselves celebrating on the pitch with the amazing British girls who had just won our first ever Olympic gold medal in women's hockey..

Rio is a breathtaking place at any time. During the Olympics it became one huge meeting of sports enthusiasts from around the world - total strangers chatting on the metro, finding ways to overcome the language differences to share the experience.

Three years ago, Kate and myself signed up as volunteers. Just over a week ago we found ourselves celebrating on the pitch with the amazing British girls who had just won our first ever Olympic gold medal in women's hockey. The same girls we had worked with daily over the tournament and on the same pitch we volunteers had played on first as part of setting up the cameras for the broadcast crew.

Both Kate and I are also hockey coaches, and with this in mind have captured many notes and ideas from our experiences, to bring to life in everyday development of our players talents at all levels going forward.

If you enjoy sport, and will be over 18 in 2018, look into the Commonwealth Games in Australia. It was a time so filled with superlatives that I don't think we have processed it all yet. So many friends made from around the world, international class hockey and the best VIP pass in the world - I'd recommend you start saving up now if you possibly can.