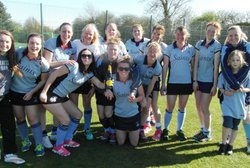 It has been a great season for Saints ladies sides with 3 of the 4 teams earning promotion !

The first team won their league - a very competitive East 2NW and promotion to East League 1 north – the highest level the team has achieved. A great effort by the squad, lead by Captain Alice Wright.

The 2nd X1, captained by Rosy Sabatino, finished the season on a high last Saturday winning their final game of the season 1-0 vs St Albans V to claim promotion and the runners up spot on goal difference in 5 Counties League Division V.

The Club`s 3rd X1, couldn’t match the other teams results, but did feature in the national “Hockey Paper” when they ended their losing streak with a resounding 7-0 away victory against Ely 3rd X1!

The Club Sunday morning introductory ladies fun hockey fitness sessions (Newcomers welcome, any ability / experience, sessions continuing until June, 10-11.15am at Longsands academy) have also proved very popular with both new players as well as those returning to the game - sometimes after a long break. It has been great to see a number of these players also join regular Club training sessions as well as playing Saturday Club matches.

The Club welcomes new players at all levels, particularly to strengthen the teams that will be playing at a higher level next season. The 1st X1 are especially looking for a goalkeeper to replace their talented young `keeper Laura Tonkin who is planning on taking up a sports scholarship in USA in the autumn. Specific goalkeeper training and busy training sessions guaranteed!