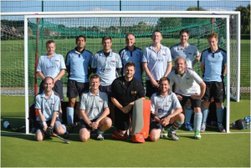 Saints came from behind to get their 4th win of the season, 2-1, ending a disappointing run of form.

Despite being without player-coach Jamie Cluer (golfing) and integral defender Anthony Holmes (injured), St. Neots put in a sterling performance against Bourne-Deeping to come away with the 3 points and return to winning form.

St. Neots started dozily and struggled to string 3 passes together. Instead, Saints gave the ball away in a repeated fashion attempting difficult and low-percentage passes - nothing new there then. One such pass from Rhys Edwards cost Saints dear. The Deeping forward latched on to the loose pass, went past Edwards with the ball and slipped it to his young and nippy forward who struck the ball with force past onlooking goalkeeper Rob Morris.

This spawny goal was the wake-up call that Saints needed who suddenly upped their game and started playing like a team who meant business. In fact, from that point onward, St. Neots completely dominated possession of the ball. Once again Adam Maltby was up to his usual tricks, making defenders weak at the knees as he ran at them with pace and skill. Iain Moor began to boss the midfield with precision passing and Chris Butterworth worked like a workhorse on pure adrenaline up and down the pitch.

Saints' equalizer came with a bit of fortune; however after their recent run of luck, it was about time the favour of the hockey gods changed. A piecing run by Moor through the heart of the Deeping defence left him with a 1-on-1 with the keeper. Moor attempted to lift the ball over the sliding keeper, but somehow he managed to get his hand up and parry the ball. However the keeper could only manage to deflect the ball onto the inside of his own post. The ball ricocheted back towards Joe Derby who slotted the ball home from 1 yard. Saints maintained the pressure until the half time break but couldn't take the lead.

After the break, not a lot changed; Saints continued to dominate and create chances, and Deeping continued attempting to desperately cling on to the draw. Finally the building pressure was released as Maltby, flying down the right wing, skipped past 4 Deeping defenders and pushed the ball under his shoulder to unmarked Darren Coles on the penalty spot. Coles did the rest, sweeping the ball with pace and accuracy to give Saints the lead.

Deeping never really looked like scoring again despite having 4 penalty corners in the second half (most of which were fluffed by the stopper). However, Morris did have to make one smart save low to his left with the tip of his kicker and David Humphrey made a strong stop on the goal line. But Saints' mopped up the minimal danger presented to them and came away with a 2-1 win.

A timely return to form for the boys in blue as they have a must-win game against bottom of the League Ely City who have yet to pick up a single point. Saints were helped this week as the top 2 teams (Cambridge Nomads and Cambridge City) both lost. All is to play for in the campaign for promotion.