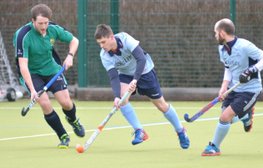 A late goal from Dan Sutton ensured an emphatic win for St. Neots and sent St. Ives down in to the relegation zone.

An early and late goal for St. Neots was enough to take all three points in a tense and heated derby match.

A swift and clinical interception breakaway goal from Garth Mooney, ably assisted by Adam Maltby, put Neots ahead after only 8 minutes. St. Ives drew level soon after from a mishit penalty corner which called up goalkeeper Charlie Allen will feel disappointed he didn't make the save. Nonetheless, St. Neots continued to press and looked much the better team going into the half time break; Garth Mooney almost scored his second after a blistering run with only the metal of the upright denying him.

St. Neots came out of the blocks in the second half at full tilt and possibly should've scored several from the opportunities they had, both in live play and from penalty corners. David Humphrey looked destined to put Saints in front with a simple tap-in however Dan Sutton had other ideas and swooped in reverse stick, stealing the ball from his teammate, and dragged the ball wide from 2 feet out.

With 5 minutes to go, an enraged Mooney gathered the ball on the halfway line and roasted 4 St. Ives players before shooting past the Ives' keeper. Sutton was there to deflect the ball into the net and Neots had the lead once again.

Despite a gritty and ugly last few minutes, St. Neots held on to the win maintaining their excellent run of form going into next week's big game against top of the table Cambridge South.

Phil Johns' was awarded man-of-the-match for his excellent defensive work throughout the game.