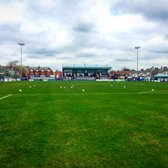 Recap of this weekends action

Vets save the day in a dissapointing weekend.

With plenty of games still to play everyone was holding their breath when the rain was coming down heavy on Saturday morning, this didn’t seem to affect the Cromley Road pitch as the first team hosted Rochdale Sacred Heart. Kick off being the slightly earlier time of 1 o’clock so the City fans could prepare for their Premier League winners party…anyway back to the game.

Again, like the same as previous weeks Georgians started the game with a fast tempo and dictating the play. The First half could of ended 3-0 but a mixture of being unlucky in front of goal and wasteful with chances it finished 0-0.

Second half was much of the same, with Georgians dominating play but unable to find the back of the net. Georgians front line kept the Rochdale keeper busy making him pull off several top saves. Despite the chances missed at the front the Georgians back 3 never looked troubled this as well as first team debut to youth team striker Jordan Anderson was a big positive to take from the game. Last chance did fall to Anderson who thought he had won it but it fell the wrong side of the post. Two points dropped in a goalless draw.

We look ahead to next weekend as we travel to Walshaw Sports.

Ressies game Vs Atherton Town did fall short of the weather as they still have half of their season left to play, they look ahead to next Saturday as the travel to high flying Wythenshawe Amateurs.

Youth recent poor formed continue but it still see’s them sit 3rd place in the league with many games still to play. They travelled to Marine Travel Arena to face a physical Marine side.

The game started in the worst possible way when after 2 minutes Marine scored a goal that 3 keepers wouldn’t save. From then on it was end to end stuff with tackles flying in and saw a number of first half bookings, chances for both teams towards then end of the half but it remained 1-0 at the break.

Second of the half was much of the same, and it wasn’t until the 60th minute when Georgians defender Honri Lewis unluckily headed into his own goal following a free kick, after this Georgians were pushing for an equaliser and the inevitable did happen when a lovely Marine counter attack wrapped up the 3 points for the team from Merseyside.

Despite the poor form the young Georgians must pick themselves up as they have 11 games till left to pay the next coming up this Sunday Vs Morecambe at Cromley Road.

All down to the Vets to save the weekend and they didn’t disappoint as they travelled to St Helens to face Pyramid St Helens in the Chairman’s Trophy. A complete performance for the over 35’s scoring either side of the half, one from Alex Kemp the other from Mike Gould and keeping an important clean sheet to win 2-0. This continues their invincible form in league and cup but they will face an either bigger task next round as they come up against Vauxhall Motor Veterans away from home.