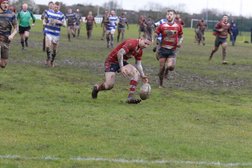 Baltic conditions as Stockton and North Shields do Battle in the mud.

Heavy overnight rain (again) made for a muddy pitch and a strong wind as Stockton took on North Shields in a game re-arranged from last week.

The first team pitch was declared unplayable, but the second team pitch was in reasonable condition considering the rain in the previous 72 hours.
Stockton started well, playing into a strong wind they gained good position in the North Shields 22 and then quickly moved the ball left to gain an overlap and give centre Jonny Horner a simple try. Steve Jones added a conversion and it was 7-0.
On 13 minutes Horner put winger Tom Lloyd away down the Stockton right and then took a return pass to outpace the defence for another try, again converted by Steve Jones.
17 minutes into the games and it was 21-0, returning skipper Charlie Doherty bursting through the defence. Jones again converted.
At this point the weather deteriorated, with a 10 minute storm of rain, sleet and a gale force wind completely soaking everyone present.
Nevertheless both sides were trying to play good rugby in difficult conditions and on 20 minutes, in the middle of the storm, North Shields scored a bizarre, but deserved try.
Not to be outdone, Stockton came straight back and scored a try that started on their own 5 metre line, with the ball being constantly re-cycled through numerous pairs of hands before Jonny Horner (who else?) outpaced the defence to score an unconverted try wide out on the left.
32 minutes, and left wing Joe Hargreaves showed some good pace to slice through the defence and then dive over the line for a real water splash try! Jones again converted. Stockton 33, North Shields 5.
Just on halftime Charlie Doherty broke through from halfway and outpaced the defence to score a converted try. Half time, Stockton 40, North Shields 5.
Stockton continued to dominate the game in the second half, which was played almost exclusively in the North Shields half, butthe deteriorating conditions meant that scoring was getting more and more difficult. On 62 minutes Jonny Horner crossed for his fourth try of the afternoon to take the score to 45-5, and at this point referee Revis Phillips sensibly spoke to both captains and it was agreed, that as a couple of North Shields players were showing signs of hyperthermia, that the game should end. The two captains shook hands and all present adjourned to the Bar.
Many thanks to North Shields for their efforts, and to referee Revis Phillips as the man in the middle. Next up it’s a trip to Horden, let’s just hope that spring has sprung by then!
Share via
FacebookTwitter
https://www.pitchero.com/clubs
Recent news