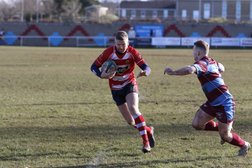 A trip up the A19 to old friends Horden and Peterlee is always a pleasure and today was no exception.

A sunny, but breezy Eden Park greeted the two teams and a good crowd had assembled for what was expected to be a tight game. The big Horden pack dominated the first few minutes of the match and the home side took an early 3-0 lead.
Stockton were being kept generally in their own half as they were playing into the wind, but a couple of penalties gave them position in the Horden half and with quick ball from a lineout centre Steve Tampin broke through the defence before being stopped a couple of metres from the try line. The ball was quickly re-cycled and second row Steve Taylor crashed over by the posts. Steve Jones added an easy conversion and Stockton were ahead 7-3.
Directly from the kick off Stockton scored again. Another Tampin break set up the chance and fly half Steve Jones took an inside pass to score wide out on the right, he then added an excellent conversion. Horden 3, Stockton 14.
Horden now used their big pack to good effect. They were driving forward well and dominating the scrummage. The Stockton scrum was conceding penalties and each time they did Horden opted to take the scrum again to wear Stockton down.
Unfortunately for the home side, this tactic rebounded on them on 32 minutes when Stockton were given a free kick for Horden engaging too quickly on the Stockton 22 metre line. The bal was quickly tapped and ground made before Jonny Horner made a break and set skipper Charlie Doherty free on the halfway line. Charlie outpaced the defence to score a converted try under the posts. Horden 3, Stockton 21.
Back came Horden in the 37th minutes, when their scrum half broke around the blindside of the scrum in the Stockton 22 and outpaced the defence for a good try. The conversion was added and the gap between the sides closed to 11 points.
Just on halftime Stockton again broke from their 22, moved the ball right and centre Jonny Horner outpaced the defence from halfway to score an unconverted try wide out on the right.
Half time arrived with Stockton leading 26-10.
For the first few minutes of the second half Horden were in control of the play. On 48 minutes, Steve Jones put in a long defensive kick into the Horden half. The Horden fullback tried to kick it into the strengthening wind, but only succeeded in giving the visitors possession. Stockton took full advantage, moving the ball wide on the right for Jonny Horner to score another unconverted try. Horden 10, Stockton 31.
For the second time in the game, Stockton again scored from the kick off. The ball being quickly moved left, where left wing Joe Hargreaves outpaced the defence for a good try. Steve Jones added a superb conversion from touch and Stockton were just about home and dry at 38-10.
Horden were still battling away and scored a try on 58 minutes, before Steve Taylor deservedly scored his second try of the afternoon in the 65th minute, The Jones conversion took the score to 45-15, before, after 77 minutes the Horden fullback, whose attacking runs had been a feature all afternoon, crossed for a converted try.
Horden now attacked the visitors try line, but lost the ball five metres out, with Stockton taking full advantage to sweep the length of the field for replacement flanker Dan Kidd to score. Steve Jones again added a conversion and the game finished with the score Horden 22, Stockton 52.
This was an excellent win and keeps Stockton within the top 5 in the league. Best wishes to Horden and Peterlee for the rest of the season.
Share via
FacebookTwitter
https://www.pitchero.com/clubs
Recent news