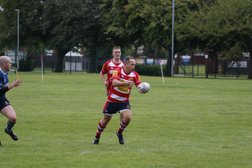 A home game prior to an England International proved very popular especially when the KO was moved forward from 3 pm to 2:15 to allow folks time to change after the game and still be on time for the start of the game in the club .

So a healthy squad included the likes of Josh Crozier, playing his first game since damaging his knee ligaments in early September , and Tom Brown , making his first appearance in some time owing to work commitments.

Stockton were soon on the score sheet with ties from scrum half Ciaran Flaherty, fly half Reece Cowley and 2 from winger James Burden, the first of which was converted by Reece . So Stockton were leading 22-0 after 20 minutes.

Experienced Steve Thornton was next over the whitewash to claim maximum bonus points with our fifth try which Reece Cowley converted.

Winger Rob Graham touched down and then James Burden claimed his hat trick and again Reece slotted the extras so Stockton were leading at half time by 41-0.

Bishop began to struggle with injuries so Stockton began to loan them numbers to keep them at 15 and many thanks to Mo. Douthwaite and Anth Mulgrew for helping their cause when they lost front row players .

A great win for the Saracens squad and their Leadership Team of Captain Simon Crozier, Coach Simon Brown and Manager Stan Chapman