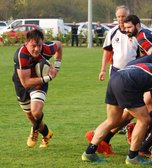 Stowmarket recorded a hard fought win against Harlow which kept their chance of a play off place alive but reduced Harlow's chance of survival from relegation. Stowmarket scored two tries through James Simpson and Dan Garrard in the first 5 minutes. However, they did not make the most of dominating the opening 20 minutes squandering a couple of chances and it was Harlow who scored next with their first attack following good forward work.

Stowmarket replied with a penalty from Casha Nijhawan but just before half time Harlow scored a second try which was converted.

Harlow started the second half the better dominating possession for long periods. Eventually they scored a fine counter attack try to take the lead. But not for long, as Leif Bjorsen scored in the corner. In the final 15 minutes Harlow missed a penalty kick for goal and despite being under pressure Stowmarket held on.

Next week Stowmarket and Southwold do battle at Chiltern Field in the final game of the season. Kick off 3pm.