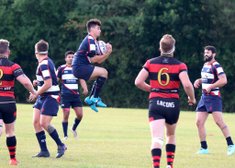 After weathering an early Wymondham onslaught Stowmarket scored a breakaway try when Dan Garrard outpaced the defence to collect a clearance kick to score under the posts. Despite playing against the wind it was Wymondham who were on top as they denied Stowmarket possession. It was therefore a surprise when Stowmarket scored a second try through Zak Chine-Lacey after running the ball from their own half.

Wymondham changed tactics and took on the home side upfront but Stowmarket defended resolutely and in two counter attacks came away with two penalty kicks by Dan Garrard. Half time 20-0.

Stowmarket started the second half better and after superb handling gave Ben Stevens the opportunity to go over for try with a Dan Garrard conversion. Wymondham came back strongly and, when Stowmarket was reduced to 14 players, scored a well work try which was converted.

In the final quarter Stowmarket's superior fitness became a key factor and in the last play of the game captain Jake Squirrell crashed over for a bonus point try.