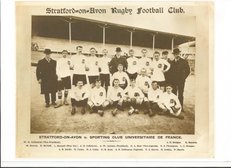 Since 1877, when the club was founded, the history of Stratford-Upon-Avon Rugby Football Club is inseparable from the history of the town. Indeed, Stratford was one of the earliest rugby clubs to be established in England.

In 1887, Archie Flower (from the famous Flowers Brewery) moved across from Cambridge and subsequently became Captain, after which the Club enjoyed several seasons of great success. For example in the 1889-90 season, as well as drawing two games against Coventry, Stratford beat Leicester three times (without Leicester scoring a single point).

The first time the Club was recorded as using the current ground was in the season 1903-4. The ground was named ‘Pearcecroft’ after William Pearce, President of the “Early Closers Football Club”, who played upon the site. The club then, as now, was filled with players from local families whose names transcend the history of the club, such as Salt, Bailey, Horton, Flower and Bird, whose descendants played at the Club (some to the present day).

In the 1905-6 season, Stratford entered the international era with a visit to Sporting Club Universitaire de France, (SCUF).in Paris. The oldest international amateur club sporting fixture in the world took place for the first time on the 26th November 1905, one full year before the first France v England full international match took place. SCUF were already planning to celebrate their 10th anniversary and the French RFU had recently established an ‘entente cordial’ with the English RFU. In the spirit of this new initiative senior figures within SCUF approached Stratford upon Avon RUFC with an idea to stage a game.
This opening game was played at the Parc du Princes, watched by a crowd of 3000 spectators, with France international Frantz Reichel as SCUF captain. Stratford, captained by GH Rose (father of ‘Sonny’), won 21-0. The following year SCUF travelled across the channel and were entertained on their arrival at a formal civic reception, attended by various dignitaries, including famous local novelist Marie Corelli, in the Old Town Hall. The return game was watched by an astonishing 2000 spectators at Pearcecroft on the 24th February 1906 and although they put up a fierce struggle, SCUF eventually lost 27-3.

However, both Clubs suffered their share of bereavements during the Great War 1914-18, and 15 members are recorded in the Club’s history as “Never Returned”.
( Stratford upon Avon RFC commissioned a commemorative cast plaque, detailing the names of our fallen players, on the centenary of the war in 2014. They are now remembered as our 'Lost XV' and their names, lest we forget, are called out before the club dinner every year.)

The Club’s rugby then suffered a decline during the period 1929-39 when the town’s Grammar School old boys, the “Old Edwardians”, split away and formed their own club. Thankfully, this decline was short lived, and after the Second World War the Club restarted and reincorporated the Old Edwardians.

It also managed to purchase the pitch at Pearcecroft and recovered some, if not all, of its earlier status. In the early 1950’s thanks to the determined efforts of the club secretary of the time: Arthur Black, contact was once again established between the clubs. The fixtures started up again in 1956 with a fine solid silver trophy for the winner donated by AG ‘Sonny’ Rose in memory of his father: The Rose Cup.
This tradition continues to this day, with matches in Paris and Stratford in alternate years. On occasions even mini and junior players get involved in this colourful event.

Stratford boasted its only full international during its best post-war period in 1962, with Tom Pargetter playing in the England second row.

Stratford was one of the first clubs in the Midlands not only to boast the installation of floodlights, but also to start mini and junior rugby sections in the 1969-70 season. As a result of Stratford’s strong youth policy, several young players have gone on to play as junior internationals, and several have moved on to First Division clubs. Nathan Webber, a former mini and junior colt player at Stratford, winning his first England A international cap against Queensland.

Even now, the mini and junior sections support teams from under U5’s to under 16’s, with 300 registered players. With a population of only 25,000, Stratford-Upon-Avon can be justly proud of the achievements of its Rugby Club, and of the commitment shown by so many managers, coaches and players.