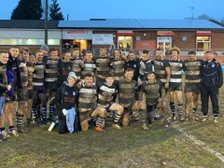 It’s been an incredible year for the senior men’s section and the sentiment of squad is shown in the picture below. Both teams celebrating a two win Saturday.

Our thanks go out to all our regular sponsors who continued support is hugely appreciated and our main sponsors;

We also must recognise the hard work from individuals who look after our club, who ensured we could play even in the horrible weather,

Thanks to all the coaches, players, supporters and friends who stuck with us during the tough times and now celebrate with us in the good.

Lastly, perhaps most importantly at this difficult time in society The Samaritans for educating us all on the importance of looking after our mental health and supporting each other.

We look forward to the challenge ahead and reigniting friendships with old friends in Midlands rugby.

Final league placing: 1st, 99.55pts
Richard Pepperell, director of rugby: “Following two very difficult seasons after a level transfer to South West (East 1), leading to a relegation, Stratford-upon-Avon RFC are delighted to be heading back to level six again. We weren’t necessarily aiming for promotion in this first season but are delighted that it happened.
“We are most pleased with the development of the wider senior section of the club. We played every second team game available and were on for a league and shield double at this level too. Last season our second team managed only five games in the season as we were simply not able to field a team.

“The coaches, captain and players worked tirelessly from pre-season all the way through to the end to finish in such a strong position. Our only loss of the season came in the first game, away to Barkers Butts, we lost this game by a single point and to be honest it is my opinion that after the traumas of the season before, the players were simply not ready to win a tight game yet. After that we won every league game we played. Including bonus point wins away at closest title rivals Malvern and Nuneaton Old Eds.
“We feel that we were the dominant team in the league and when the season was ended, felt like we had done enough to earn promotion that year. Our biggest disappointment with the abrupt end to the season was that we were due to play all three title rivals at home in the run in and were hoping for an end to the season that the players and supporters deserved.
“On Friday the captain, Matt Cook, called a night in (out) on Zoom and announced our championship win and the players enjoyed each others virtual company until 3am. This year we have created a great bunch of lads and are already looking to getting back to action in level six.”