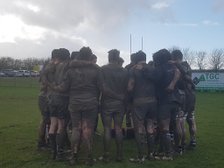 Black and whites dig another win out of the mud

In atrocious conditions Stratford RFC bagged another 4 points against bottom of the table Southam to take their unbeaten run to 17 games. With no other teams in Midlands 2 West (South) playing Stratford have extended their lead at the top to 15 points over their nearest rivals and have only 4 league games left to play.
To begin the match the Southam pitch actually looked quite good, soft and heavy down the one side but it did not look like the mud bath that it was to become.
Stratford started the game brightly, with the strong wind in their faces they quickly pinned Southam into their own 22. From quick ball supplied by debutant scrum half and part-time cricketer James Urquhart, 18-year old outside half, Gwilym Davis jinked inside his opposite man, off-loaded to hooker Ben Cole who expertly drew the final defender and put stalwart centre Jack Young in towards the corner, 0-5 with less than 10 minutes on the clock.
Little did Stratford know that this would be the last time they would trouble the scorers for over an hour of rugby. As from this point on the conditions completely dominated the game. The very strong wind was blowing in the direction of the muddy strip and the players on both sides became unrecognisable from one another and the ball a proverbial bar of soap.
Southam quickly narrowed their game up, choosing not to move the ball far from the ruck at each new phase, which the Stratford forwards in particular dealt with manfully. However, fair is foul, and foul is fair, and whenever Stratford tried to play some rugby, they quickly spilled the ball and ended up spending long periods defending again. Southam managed to draw a penalty out of Stratford in their 22, which they converted bringing the score to 3-5 at half time.
With Stratford having the wind at their backs in the second half, the hope was that they could create enough pressure to put the game out of sight. The territory and pressure came as the Stratford forwards regularly hammered at the Southam line, but the Southam defence really fronted up and they were rewarded with regular turnovers or handling errors that allowed them to regain possession and clear their lines. Clean breaks were rare throughout the entire half, Stratford content to kick out of their own half and apply pressure through territory. Yet the tries would still not come, all the while Southam within a score of the league leaders. So it was that Stratford prop Tom Stanley bulldozed his way over close to the posts on 74 minutes and with Nathan Geekie able to add the extras the result at least was assured.
Southam applied their own late pressure, winning penalties against the Stratford scrum that allowed them to enter the Stratford 22 for almost the first time in the second half, but the Stratford defence managed to hold them out and finish with the win.
Stratford have one away game and three home games remaining, each home game is against a league title rival meaning an extremely exciting end to the season. Furthermore, Stratford have a semi-final of the Warwickshire shield to play against Barkers Butts, the date of which has been thrown into doubt as their game against Pinley, that was supposed to be played on Saturday, will likely be played this coming week.
Stratford 2nd XV maintained their excellent run of form, playing against local frenemies Shottery. The mighty 2’s ran out 0-35 winners in a game in which they welcomed back locks Tom Mylott and Luke Cobb, outside half James Southall and local hero Dave Pritchard.
Whatever the fixture list looks like this weekend the club are very much hoping that the run of weekly storms will come to and end now that spring has sprung.
Share via
FacebookTwitter
https://www.pitchero.com/clubs
Recent news