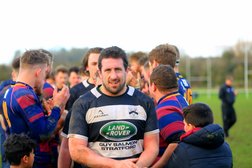 Stratford scored 9 tries, with 9 different scorers, on their way to a big win over local rivals Evesham.
With wet weather thwarting this fixture on 2 occasions, this was the third attempt at getting this one played and as expected the game was played on a big and heavy pitch, with a lot of cramp coming into play for both sets of players in the latter stages.
With a strong wind at their backs, Stratford started the game well, both teams determined to play open rugby with a lot of with. Stratford scored first, KES old boy Josh Pope started and finished a move that went through four pairs of hands in the outside backs, scoring under the posts with prolific Nathan Geekie adding the extras.
Evesham were certainly playing their part, playing a wide, open and fast brand of rugby that regularly got on the outside of the black and white defence. It was using this method that Evesham broke through down the left-hand side to score in the corner. Stratford’s defence has been miserly all season and this was the only time that Evesham would trouble the scorers.
Altering a few details in defence, Stratford managed to get a handle on the impressive Evesham fly-half and slow their game down, gradually building to dominate the game from 30 minutes on. A penalty led to driving maul from a lineout that was finished by the prop Tom Stanley and then to finish the half, man of the match Ben Cole powered over under the posts to take a 5-19 lead into the half time break.
Now with the wind in their faces Stratford had to play more rugby with the ball in hand, which suited them perfectly. A break from their own 22 led to wing Charlie Powell dotting down, before Max Haines sniped from the scrum half position. Stratford were now totally dominant on both sides of the ball, Geekie and Haines managing the game perfectly, John Bruns making a complete mess of the opposition lineout and captain Matt Cook and young prop partner Liam Vose applying pressure at scrum time.
More tries came from flanker Dan Dunmore, who was having a game to remember, Geoff Dyson who ran it in from way out, Sam Kirby and the returning Si Greenwood. Nine different try scorers is a wonderful demonstration of the way Stratford try to play the game.
Stratford have now gone 14 games unbeaten in the league and sit 7 points clear of nearest rivals Nuneaton Old Edwardians. Next week, there is no fixture for the first team and the second team are looking for an opposition. Failing that, I am sure a huge crowd will be in the clubhouse to watch all the 6 nations action. Next game for the 1st team is a trip to Silhillians, with the second team playing Leamington in the semi-final of the Warwickshire cup.
Share via
FacebookTwitter
https://www.pitchero.com/clubs
Recent news