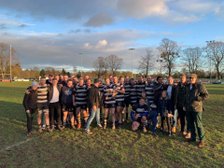 Captain Richard Pepperell was rightly beaming with pride after an entertaining and well balanced match that saw Stratford earn a hard fought victory in that could have gone either way, thuis ensureing that the 2nd Team remain unbeaten at home this season.

Stratford had a more familiar look to the team from the side that lost at Kenilworth last week. Matt Butler and David Hitchins returning to the front row as they had done for the majority of last season with stalwart Steve Mole at hooker - a position that now requires "hooking" to be one of the pratacticed skills. John Webley and New added ballast, if slightly less agility, to the second row with Pepperell playing at eight - quite a change from his success at fly half last year.

Stratford kicked off into the sun and the opening exchanges had Old L's in acendancy, pushing a lacklustre Stratford pack off the ball in the first scrum.