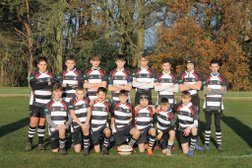 Walking onto the pitch we were met with rain and the feeling that a tough game was fast approaching. This was the semi-final for the plate so we all knew the score had to be on our side.
We started strong, but quickly began to out play them. We scored try after try; including kick chases and foot races. We got better and better as we became more confident. A few key players that need mentioning for their superb performance are Charlie Billings and Oli Feaver, who were working as a team to keep the line speed up and making quick tackles. We were playing as a team by communicating between us so that even if we made a mistake there was someone to cover.
By the time half-time whistle, we were 31-0 up and were all buzzing. We knew that they would come back at us after half time, so we made sure we started well.
We received the kickoff and were still playing as a team and with all our hearts. We kept scoring try after try and kept playing as well as we could. A few more people that were crucial were Harri Liggins, for his ability to see space and for his kicking ability off a ruck, Charles Squires for his tactical kicking throughout the game and Leo Petch for his work in the rucks, scrums, lineouts and tackling. Without these people we might not have been so dominant. When the final whistle blew we were all proud of ourselves and the fact that we didn’t concede any points.
In the changing room, we were happy with how we played and how well we worked as a team.