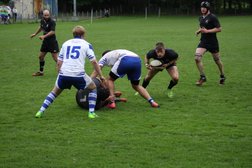 Strathmore Rugby are pleased to announce that Ali Olivier has been asked to join the Scotland Rugby League 9s Squad to take part in the Rugby League Commonwealth Games in Australia in February 2018. Strathmore already have Murray Mitchell and Niall Hall in the 15 man squad.

Ali joined Strathmore in summer 2017 and played for the Silverbacks and Scotland Club XIII at full back before playing in the same position for the club's first XV in the Union season.

The Championships are endorsed by the Commonwealth Games as an exhibition for rugby league and the participating countries will be fielding under 23 sides for the tournament.

Scotland will play a minimum of 5 matches and the other countries participating are Australia, England, Fiji, Papua New Guinea, Samoa, Tonga and Wales.

The players will also have the opportunity to do a little travelling during the trip.

Ali is currently looking for a sponsor as Scotland Rugby League don’t cover the entire cost of the trip.

If you are interested in coverage for your company supporting a young local rugby player taking part in a major International Tournament, please get in touch directly with myself or Stuart Gray (Strathmore Silverbacks team manager) to discuss.