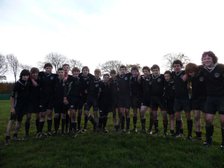 Strathie Sharks U16's stormed to a further two big wins this week – first in a development game v Fife Southern/Kinross and then on Sunday away to Glenrothes – both Caledonia League games. A highlight of both games was the seven tries by winger Cameron Guest in only his first two full games!

On Wednesday night the Fife Southern/Kinross game became a development game due to Fife/Kinross unable to bring a full team. This did not dampen the Sharks style (even though they helped the game take place by lending players to the opposition). The Sharks stormed into the game with a high tempo performance which was stunning at times with the accuracy of the support play resulting in 10 tries. Try scorers were Cameron Guest (3), Tom Watson (2), Alex Milne (2), Cameron Stewart, Tegan Gibson and Christian Taylor. Calum Campbell converted 4, Paul McGregor converted 2 Mark McQueen also converted one.

On Sunday, at a muddy and very wet Glenrothes, the Sharks continued their impressive form with an organised and disciplined performance to score 10 tries again. Man of the match Tom Watson was closely follow by Fergus Mitchell in an impressive back row performance. The speed and accuracy of the Sharks in terrible conditions, was impressive, with the front five well in control throughout. The backs were accurate with their passing and regularly stuck to their way of playing, resulting in 4 tries for Cameron Guest, in only his second game. This strong team performance resulted in quality tries for Cameron Guest (4), Calum Campbell, Mark McQueen (2), Christian Taylor, Cameron Stewart and Daniel Brodie. Calum Campbell kicked three conversations.