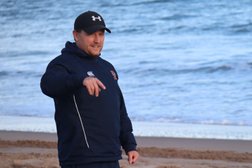 As we prepare for the much anticipated return of the rugby season, we hope you are all staying safe.

Mark has been working tirelessly in the background to secure what can only be described as an outstanding coaching squad which will see three UKCC/SRU level 3 coaches and coach educators take up the reins to develop the club as a whole.

Our coaching Squad is announced as follows:

Josh and his team have more qualifications than you could shake a stick at, but it is fair to say there are not many clubs that can boast of three Level 3 coaches.

Whilst Josh is well known to Strathie, he has put together a coaching team which will focus on both player and team development. Josh brings a wealth of experience gained at club level, Abertay University Rugby and Scottish Rugby National Age-Grade Programme. Josh is Head of Rugby at Lathallan School.

Andy Henderson joins Strathie and brings significant experience at both club level (Melrose, Heriots, Kirkaldy, to name but a few) and National level with Scotland Women, u18's and u16's. Andy's day job is Director of Rugby at Strathallan School.

Responsibility for Strength and Conditioning remains with Daz, who has driven the squads fitness levels higher than ever. A consummate professional in all he does, Daryl remains a key to the clubs success.

In an early statement from Head Coach Josh Gabriel-Clarke, he stated that his coaching team will focus on nurturing home grown talent, with a specific focus on skills development and is looking to introduce a mentoring programme whereby some Strathie legends can assist the younger players.

This announcement brings a buzz back to Inchamcoble and lays the foundations on field to the clubs long term Strategic objectives.

Stay safe folks, look after each other and we will see you down by the loch soon !