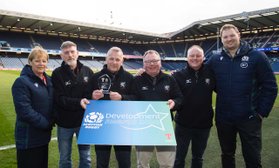 Strathie Pick up Caledonia Region Community Club of the Year

The Scottish Rugby Development Awards celebrate and recognise the efforts of players, coaches, match officials and volunteers from the domestic game across all five regions of Scotland. The five winners from both regions came together with Scottish Rugby officials for the ceremony.

“Sunday was a fantastic day to recognise our deserved winners of our regional Development Awards. It was a great day of celebration and an important one for us to say thank you to the volunteers for all the work they do for their clubs, schools and local communities.These are volunteers who put in a huge amount of time and effort and are crucial to the sustainability and development of the game. It was nice to spend some social time and enjoy their company in hospitality at the Scotland v France game.”

Strathmore has established a women's team over the past year and trialled training for a girl's youth team. Their youth section has also continued to grow reaching record playing and membership numbers. This follows two successful Tartan Touch programmes (Summers 2018 and 2019) which had excellent attendances from club members, friends and family and the wider community. In addition, Strathmore have supported their charitable partner, The Strathmore Rugby Club Community Trust, to run a Rugby Academy for secondary age males and females, a Unified rugby team for adults with learning disabilities (a tri team), autism-friendly rugby sessions for primary age children with autism and walking rugby for the less able. In addition, the club have worked closely with Active Schools and local schools to facilitate matches and training sessions.