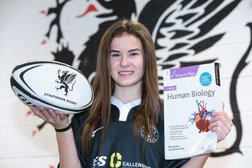 The Trust is enjoying more success by helping a 16-year-old Edzell girl realise her dreams on and off the pitch.

Niamh Pert was one of the founding members of the Stracathro Estates-sponsored Rugby Academy launched by The Strathmore Rugby Club Community Trust in 2017 and is well on the way to achieving her career and sporting dreams with the help of the trust.

The academy runs free sessions for S1-S6 pupils from the Forfar, Kirriemuir and Brechin areas 2-4pm on Friday afternoons during termtime with the objective of developing them as individuals as well as players. To that end they receive coaching in life skills such as nutrition, cooking, communication, first aid and yoga as well as playing and refereeing rugby union and league.

Niamh got involved through a friend and has gone on to play for Caledonia Midlands, a selected training group for girls’ rugby development which is part of the pathway to the Scotland Squad. She’s also developed her role with the trust – becoming one of its Community Project Assistants, who help run its groundbreaking autism-friendly rugby sessions for primary children launched last year and coaching some of the rugby sessions.

The development she’s gained has given Niamh the confidence and some of the experience required to target a career as a physiotherapist. She’s now studying for the necessary Highers at Brechin High School and applying to university physiotherapy courses.

Speaking about her dream and how the trust has helped, Niamh said: “The Stracathro Estates Academy has helped me develop my skills both on and off the pitch and build my confidence.

“Doing a job that combines my love of science with my love of sport seemed like a good combination. The trust has allowed me to gain qualifications and experiences to help my course application stand out, including work experience with Angus Physiotherapy.

“It’s also given me loads of opportunities I wouldn’t have had, including qualifications such as my UKCC Level 1 coaching in rugby, first aid and refereeing and work experience. I’ve learned and improved loads of other skills which will help me throughout life, such as good communication.

“I’m very grateful for the opportunities I wouldn’t have otherwise had and I hope other young people like me use the trust to gain these and other opportunities.

“On the field, the trust experience has encouraged me to join several rugby teams - Strathmore Sharks, Tayside and Fife Girls Rugby Squad and Dundee Rugby in addition to Brechin Pirates, where I started. My favourite thing about Rugby Academy is that I get to train alongside the boys and be challenged in ways I don’t get at my regular training.

“I’m now using my rugby connections to try to go to New Zealand to work and play rugby for six months between school and university. Thanks to the connections I’ve made through the trust, this dream is looking like it could be possible.

“I’ve also made friends from different schools I never would have met if it wasn’t for the academy.”

Trust Chair, Stuart Gray, said: “Niamh took to rugby very easily with coaches commenting on her natural pace. Her sidestep has also dumbfounded even the most experienced coach during the touch rugby games!

“Niamh started volunteering with the autism-friendly rugby last summer and was confident and empathetic from the start. She is a brilliant example of what we hope to achieve with the Stracathro Estates Rugby Academy and we look forward to supporting her further.”

Maggie says: “I’ve been very impressed with what the trust has achieved to date and I’m excited to be part of such an ambitious organisation. The projects which are currently running provide Angus residents with loads of opportunities to develop through rugby. I'm looking forward to growing these and looking at what else can be done in the future.”

Stuart Gray, said: “The trust is in a great place - with our projects running well and grant funders supporting our vision. Maggie brings a breadth of sport management experience and I look forward to working with her to further develop the trust.”

The trust was founded in 2017 to increase public participation in sport, particularly rugby union and rugby league, in the Forfar, Kirriemuir and Brechin areas to benefit community health and wellbeing as well as develop young people into healthy, positive members of the community through the positive ethos and values of rugby.

It’s based at Strathmore Rugby Club in Forfar and works in partnership with Strathmore RFC, Brechin RFC, sportscotland, Scottish Rugby and Scotland Rugby League. Maggie Lawrie’s role is supported by funding from the Forfar Common Good Fund, sportscotland, and The Robertson Trust.

For details go to the trust’s Facebook page at www.facebook.com/TSRCCT