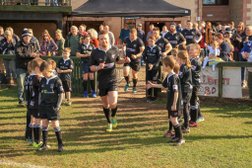 Strathmore Rugby Club welcomed Greenock RFC and their many supporters to Inchmacoble on Saturday for the National Shield semifinal game. With the sun shining and probably the biggest turnout of supporters seen at Inchmacoble for many a season the scene was set for a cracking afternoon of rugby.

Greenock started strongly and were awarded a penalty early on to give themselves a 0-3 lead after only 3 minutes. They quickly followed that up with a try but narrowly missed the conversion but were sitting comfortable 0-8 points to the good after only 6 minutes with the men in black wondering what had hit them.

Thankfully for the home support the home team found their feet and started to play as they had done all season. Lee Alexander nudged over a penalty on 15 minutes before Ryan Milne scored a try under the posts which Lee Alexander split the uprights with the conversion. 10-8 to Strathie and a sigh of relief could be heard and felt as the Inchmacoble crowd got behind the men in black. This was without a doubt the tightest game they’d witnessed all season and it proved tense upto the halftime whistle with Strathie missing a penalty kick but Greenock successfully retaking the lead through a penalty. 10-11 at halftime.

Substitutions were made by Coach Alan Brown at half time to keep the legs fresh and try to regain the lead.

With a better start second half than the first Strathie did exactly what they’d been asked to do and it was Ronan Joy who jinked his way past the first time dog legged Greenock defensive line to score a try out wide and regain the lead 15-11. Both teams were being penalised at the breakdown on regular occasions and it was Greenock who opted to kick for goal on 56 minutes and brought the scoreline back to just one point 15-14. Further substitutions from the home team saw Strathie extend their lead with a little bit of magic from replacement scrum half Blair Butchart who spotted Captain Dave Smith go down the blind side and he managed to get finger tips to ball almost in full somersault to score a crucial try 20-14 with 18 minutes still to play.

As the pattern of play had gone all afternoon it was little surprise that Greenock would be next to score but a converted try was painful for the home support to watch as that put Greenock back in front 21-20 with only 3 minutes of play remaining much to the joy of travelling fans.

A tense final few minutes saw Strathie win a penalty in the their own 22 and a tremendous kick from hand from Andrew Burgess gave them a lineout well into Greenock’s half and a platform to work from to go onto win the game and a place at Murrayfield on finals day. Strathie lineout was successfully secured and a phase of play completed before Strathie were awarded a penalty for a Greenock infringement. All eyes and the pressure fell onto Strathie kicker Lee Alexander who struck the penalty kick solidly for it only to hit the post and bounce back into play. Strathies chance had gone as had their undefeated season with a cruel twist right at the end. Full time Strathmore 20-21 Greenock.

Head Coach Alan Brown commented “The lads are gutted we played well and were probably the better team, but just wasn’t to be today. We’ve had a fantastic season winning the League and the Caley Shield so shouldn’t complain and now we regroup and finish off our season next week. Good luck to Greenock at Murrayfield.”

This Saturday sees the XV a side season end for the Inchmacoble men’s sides before both the 10’s and 7’s competitions start. Aberdeen Wanderers is the final destination for the 1st XV in the rearranged league fixture. Kick off 3pm in Aberdeen.