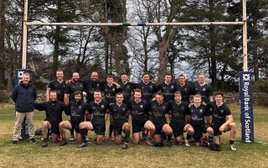 Strathmore 1st XV made the trip north up the A90 knowing they needed a win over Aberdeen Wanderers following their disappointing draw away to Grangemouth Stags last Saturday.

Strathie started well and only took 4 minutes to scored their first converted try. Jamie Scoular crashing over the try line from close in with Lee Alexander adding the extras 0-7. Both teams had chances to score tries but couldn’t manage to break each other’s defensive line until 36 mins when utilitarian play Dave Alston playing winger, scored in the far corner after great running and quick hands from the backs opened up gaps to allow Alston through. Lee Alexander again slotted a beauty of a conversion splitting the uprights.
HT 0-14.

Second half started and the pitch was cutting up badly but that didn’t stop the Men in black driving the home team back and flanker Ian Reid seized the opportunity to grab another try on 44 minutes in what has been a great first season for him at Strathie. Again Lee “Mr Metronome” Alexander added the conversion. Aberdeen never looked out of the game and tested the Strathie defence on several occasions but they stood resilient and it was only when James Lockhart scored on 70 minutes that you could see their heads go down. Olivier played a “Finn Russell” style looping pass taking out two or three defenders to release Lockhart who held off the winger and rounded the full back to bring the scoring to an end. FT 0-26

Head Coach Stewart Ross commented “The boys showed some real character playing on a terrible pitch. Defensively we worked very well as a team and took our chances in attack”

This Saturday the 1st XV return to Inchmacoble for their first home game in 3 weeks looking to spoil visiting Caithness’ party who know a draw or win will see then win the league. K.O. 3pm. Admission is free and a great home support will help the guys along greatly.