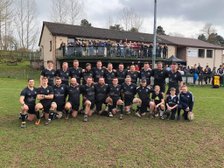 The top of table clash in Caley Division 1 on Saturday at Inchmacoble always had the potential to be a cracking game but often with these high pressure games they don’t quite deliver, could Strathie spoil Caithness’ party and maintain their 100% home winning run !

Strathmore 1st XV sitting second to league leaders Caithness welcomed the Thurso boys along with many of their supporters who had made the long journey down hoping to see them win and clinch the league title.
With a packed out hospitality and many a supporter for both teams the atmosphere was electric at kick off and all that was left was for the players to deliver a game to match the buzz around Inchmacoble and boy they did just that. With 15 tries scored in a frenetically paced game it was most definitely the game of the season with both teams playing top level Rugby from the kick off.

Strathie took the lead with a penalty on 6 minutes, Lee Alexander cooly slotting the ball between the uprights. From the restart Caithness then found space out on the wing to score the first try of the game on 7 mins before Darren Bell put the Men in Black back in front on 10 minutes. Dave Vernon very quickly extended Strathie’s lead on 13 minutes but Caithness then came back on 17th minutes with another try. The game had certainly started fast paced with great rugby from both teams 15-12 after only 18 minutes. Within the next 10 minutes Strathie had picked up the try bonus point after Jamie Scoular and James Lockhart both scored tries putting the Inchmacoble boys 25-12 in front however as through out the game Caithness came back with another try on 31 minutes. Ian Reid brought the first half scoring to an end with a try on 40 minutes putting Strathmore further in front on the whistle. 30-17.

The second half kicked off and it was Caithness who were celebrating as their opening try of the second half gave them the try bonus point that clinched the league for them no matter the result of the remaining game time. With a buoyant away support the large home crowd were not to be out done and celebrated as Lee Alexander scored the first home try of the second half on 50 minutes before club stalwart Stuart Disco Gray crashed over the whitewash much to the delight of the supporters looking down from balcony on 55 minutes.

Individual try of the game came from James Lockhart as he intercepted a loose Caithness pass deep in Strathie’s own 22 and sprinted the length of the pitch to score under the posts which Lee Alexander added the conversion to. 47-24 after 70 minutes.

With 10 minutes left on the clock you could forgive the players for seeing the game out given the effort put into this game but neither team were going to do that and Caithness ran in two more tries on 75 & 77 minutes. Fans favourite Marc Scoular known affectionately as the Scouldozer shook off his prop image and sprinted up the wing albeit from close in to score the final points of the game on 79 minutes to rapturous applause from the home support.
FT 54-36 after the full time whistle Caithness were presented with the League trophy as the losing try bonus point put them 6 points clear and out of reach for Strathie despite one game remaining.

Head Coach Stewart Ross commented “The boys were phenomenal today, putting 54 points on the league champions shows how good a side we are. Big thanks to all who came down to watch, I seriously have never heard the inchmacoble crowd that loud before”.

The Angus Development side playing in Montrose also had a fantastic victory beating Bo'ness 64-11, the victory means that they move into 6th place and have secured a top half of the table finish for the season.

This Saturday Strathmore 1st XV bring their season to an end with another home game this time hosting Glenrothes kicking off at 3pm. Admission is free and it would be great to get another large home support to finish the season off.