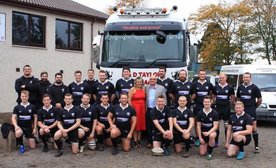 Strathmore first XV had the Inchmacoble boffins searching back the record books after the final whistle on Saturday following their 125 -0 demolition of Alloa RFC.

Head Coach Alan Brown had been concerned the free week last week may have faltered the teams amazing undefeated start to his maiden season as head coach at Strathmore, but he had little to worry about as his players immediately picked up where they’d left off.

Scoring 19 tries in total over the 80 minutes of play with 9 tries in the first half and 10 second half certainly gave the large Inchmacoble crowd lots to cheer about. Top try scorer on the day was Darren Bell bagging 5 tries for himself but Man of the Match went to flanker Ian Reid who put in a sterling performance throughout the game.

An Alloa player unfortunately did suffer a neck injury requiring medical assistance in the second half resulting in the game being moved across to the 2nd XV pitch whilst an ambulance was called. Everyone at Strathmore wishes the player well.

Coach Brown was delighted at full time commenting “The guys were outstanding today and they even exceeded my expectations. We have to stay grounded and reset for next week. We can’t expect scorelines like that every week but we’ll enjoy it tonight”