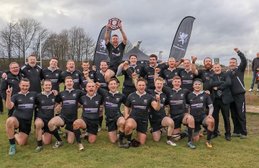 Strathmore RFC 1st XV went into Saturday’s game at Inchmacoble against Ellon with a 100% record of 14 wins from 14 league games but no one could of expected that would also be the number of tries they’d go onto score in a reasonably one side game winning 92-12. Strathie ran in an amazing 14 tries over the 80 minutes much to the delight of the large home support, with the try bonus point in the bag within an impressive 16 minutes of the game starting. Ally Smith opened the scoring before Ronan Joy added the second and Darren Bell scoring the third and fourth try of the game. All 4 tries were converted by Lee Alexander.

Matt Russell and Ronan Joy then added to the try tally before 24 minutes were on the clock with Alexander adding the extras to give the home team a 42-0 lead. Ellon managed to score the first of their two tries 3 minutes later when their inside centre crashed over the whitewash and also nudged over the conversion. With the game virtually won and Ellon heads dropping the Strathie players were in no mood to ease their foot off the pedal and ran in 3 more tries before the half time whistle. Darren Bell secured his hatrick on 31 minutes and Andrew Burgess added another on 34 minutes, leaving Glenn Feighan to bring the first half try frenzy to an end on 37 minutes. Lee Alexander added 2 of the 3 conversions giving a halftime score of 61-7.

Head coach Alan Brown made 4 substitutions at half time bringing on fresh legs but also resting players with one eye on next weeks National Shield semi final. Ellon might have been thinking the halftime changes would see the Men in Black ease off their dominant display first half but it was business as usual for the home team as the replacements slotted into position immediately and like a well oiled machine the home team started scoring similar to first half.

Andrew Burgess getting his second try of the game which he duly converted after only 6 minutes of the second half starting. This was quickly followed by Darren Bell getting his fourth try of the game on 57 minutes putting the Men in Black comfortably 73-7 in front. Ellon however had a brief resurgence and their flanker managed to wriggle his way through to score the visitors 2nd try and last points of the game with 18 minutes still to play.
Strathie were disappointed to lose a second try to the visitors and winger Darren Bell was hungry for more as he went on to get his fifth try of the day 2 minutes later. Ronan Joy then scored his 3rd try to make him another hatrick man with both of these tries converted by Lee Alexander. Just before the full time whistle Rory Mellis added the 14th try of the game to give the already crowned Caley League Division 1 Champions their 15th win from 15 league games in emphatic style.

With only 1 league game to go on the 06th April away to Aberdeen Wanderers the Inchmacoble boys will be desperate to get secure their 16th win from 16 games which would give them their 100% record for a whole season as they set out to do.

Head coach Alan Brown was happy with the result commenting “the lads played ok today and we scored some good tries. I’m delighted we got a run out as it’s been a few weeks again without a game but no injuries from today to worry us for next week means we go into the National Semifinal with a full squad to pick from.”

As Head Coach Alan Brown alluded to Strathmore welcome Greenock RFC to Inchmacoble this Saturday in the National Shield semi final with a place at Murrayfield in finals day awaiting the winner. Kick off is 3pm on Saturday and the players would welcome your support. Club President Bob Baldie commented “next Saturday is a big day for the club with Greenock bringing a few buses of supporters up and we hope our supporters get along to support the lads and make it a real atmosphere that we know at Buzzmacoble on the big occasions. Free entry so come along clubhouse and bar will be open.”