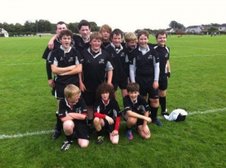 On Sunday 2nd September Strathie Shark S1/S2 team travelled to Blairgowrie along with many Strathie Sharks teams. Being the first game of the season the team were under some pressure to put their mark on the league. We kicked the game off with an outstanding performance with hard hitting tackles and some good running support from all players, an early try made sure that the Shark's heads stayed up and eased a little pressure off of them. From there on the game flowed very well with good communication and calls from the Strathie side. The first fifteen minutes were played great, but there were still another two fifteen minute periods to go. The team had a hard pre-season training and the boys put 100% effort into their game, this was shown as Blairgowrie struggled to leave their own half and this was down to good team work, defence and hard work. Everything that was taught throughout the training was put into good practice. All 12 lads gelled together as a unit, looked and played well together. This week we see the S1/S2 side go head to head with rivals Carnoustie away from home, after the game the team played on Sunday I'm positive they will go there with their heads held high and give them a good game of fast flowing rugby. Well done to all, keep the good work up. Also would like to thank everyone that was there for support!