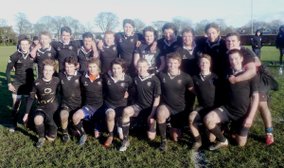 Strathmore U18s storm to their most impressive win!

Young Strathmore Team make semi-finals of Caledonia Cup for the first time
Having only played one game (last week) in three months, Strathmore U18s played Kirkcaldy at Kirkcaldy in the Caledonia Cup. Playing their most impressive rugby to date, Strathmore played with real quality and determination for the full game against a strong Kirkcaldy side – well supported by a big home crowd.

The first half saw Strathmore spend 20 minutes virtually camped on Kirkcaldy’s try line but could not quite break through a strong defence. Finally through quick thinking, Conor Blackmore linked with Struan Robertson passed to Fergus Mitchell then to Alex Milne who stormed in at the corner for an impressive try. The Kirkcaldy try came from a charge down.

Strathmore continued to surprise and rock the big Kirkcaldy side with the speed of their general play, accuracy at the ruck and general ability to vary their game. The back row of Fergus Mitchell, Lee Alexander and Scott Strachan were outstanding with their ball carrying, tackling and rucking. Andrew Coupar was also well to the fore with his ball carrying and tackling. Mention must also be made of the accurate play from hooker Paul McGregor.

Kirkcaldy had their purple patch at the start of the second half with an eventual try in the corner. However, Strathmore spent 30 minutes inside the Kirkcaldy 22. However, with 2 minutes to play – Struan Robertson attacking the midfield and combined with clever running lines from centre Mark McQueen who beat two players and sprinted under the posts to score. Mark then converted to make it 12 – 10 to Strathmore.

bus leaves from club at noon