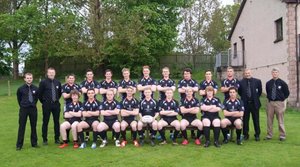 Strathmore U18s incredible season came to a frustrating point on Saturday when they went down to a strong Falkirk team at sunny Inchmacoble Park.

Falkirk had two very strong players in particular in the backs who caused Strathmore a lot of problems and influenced the score sheet, especially in the first half. Struan Robertson scored a cracking try for Strathmore in the first half to make it 5– 24 to Falkirk at the break, this try finished first class support and continuity play from almost the whole team .

The second half was a different story as Strathmore improved their field position, speed of play and ball retention causing Falkirk alot of problems. As they got back into the game they developed two quality tries from Christian Taylor and Cameron Stewart, Christian hitting a great angled run to score under the posts and Cameron attacking the edge of the ruck with great feetwork to also score under the posts. Calum Campbell converted both tires.
With the pressure Strathmore were producing, they were unlucky not to score more tries. Falkirk scored at the very end for the final try.

Strathmore U18s will now contest the Caledonia U18 Plate final against Aberdeenshire at the end of April – their final game of the season. The players and club are desperate to add silver wear to an outstanding season and finish their time together on a winning note.