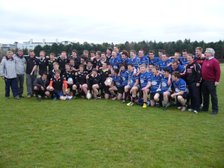 
In the final of the Caledonia U18 Shield Competition, Strathmore U18s shared the silverware with Aberdeenshire at a windy St Andrews. The last 10 minutes saw Strathmore within 5 metres of the line but they could not get the ball over the line. Having won 5 games this season in the last 5 minutes, this game didn’t quite run the same way though they were so close to winning when camped on the Aberdeenshire line at the end.

The first try of the day was scored by Mark McQueen following great driving play by the forwards and a long pass from Struan Robertson – Mark still had a lot to do, beating three players. Mark McQueen also converted from close to the touchline. Aberdeenshire replied with an opportunist try of their own when they charged down a kick to make it 7 – 7 at half time.

The second half saw Strathmore pile on the pressure with strong forwards drives and some excellent continuity play. However, this was interrupted too often by giving away too many penalties which allowed Aberdeenshire to get back into the game and develop their own field position. Strathmore began to get well onto top with field position and their speed of play – 5 minutes into the second half saw excellent handling up the blind side and debutant Drew Speed sprint into the corner for a critical try.

Lee Alexander then finished off great driving play from the forwards with a key try and Struan Robertson converted.

Two late tries by Aberdeenshire following loose Strathmore tackling allowing Aberdeenshire to get back into the game and draw an entertaining final.

The Caledonia final concludes Strathmore U18s outstanding season – played 16, drew 1 and lost 3 finishing second in the Caledonia League and joint winners of the Caledonia U18 Shield.

The coaches would like to thank all the players, parents and supporters for their support and dedication and we wish them well as some players move onto senior rugby with others staying at U18 level for another strong season.

Well done – you can be proud of a special season.