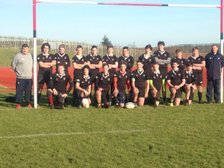 Strathmore Rugby U18s played Orkney U18s in Orkney on Sunday in a Caledonia Cup match. Two equally balanced teams competed in an entertaining game which finally went Orkney’s way with a try on the final whistle to ensure a 7 – 20 win for Orkney.
The match was poised at 7 – 15 for Orkney for almost the full second half as Strathmore pulled back into the game following the loss of two early tries in the first half. Unfortunately, Strathmore were unable to turn pressure into points as they regularly attacked the line coming very close on three occasions.
The first half saw Strathmore playing into a strong breeze which allowed Orkney to gain regular field position early on and their two tries were a result of poor tackling and failing to keep the ball. However, as the game progressed, Strathmore gradually got back into the game and No8 Anthony Franco scored in the corner at the start of the second half. Mark McQueen slotted an outstanding conversion from the touchline. The Strathmore lineout went well throughout the game both in attack and defence – giving the team some useful attacking starts. Jamie Faulkner playing at centre played very well both with his attacking lines of run and tackling skills. He was ably supported in the pack by Duncan Shaw who’s abrasive approach caused Orkney a number of problems. Orkney were, however, a useful outfit especially up front where their close driving play made regular yards.
This was Strathmore U18s first game since mid-November last year so it was understandable that they took a bit of time to get into it! A trip, for one game, which involved 9 hours on ferries, overnight accommodation and 9 hours on the bus shows how committed this group of players are!
The whole trip was a first class experience for the players and management which has helped to gel the squad even closer which stands them in good stead for the rest of the season.
Strathmore U18s squad who played Orkney:
Alex Milne, Andrew Coupar, Anthony Franco, Calum Campbell, Cameron Stewart, Dhugal Paterson, Duncan Shaw, Euan Cox, Irvine Gartley, Jamie Faulkner, Joel Farrell, Kevin Rice, Mark McQueen, Matthew Burgess, Murray Angus, Paul McGregor, Struan Robertson and Tom Watson.