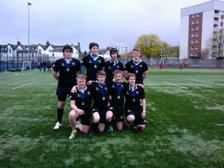 The last two weekends saw Strathmore U18s produce further 7s quality performances to build on their cup win at Madras 7s.
Two weekends ago they took part in the top level Lathallan 7s tournament with teams from throughout Scotland and were defeated at the semi-final stage. They defeated Mackie in the first game then followed this up with a strong performance against Waid. The next match was against Robert Gordons College which resulted in a defeat for Strathmore with Gordons going on to win the event. Strathmore were the team who got closest to Gordons throughout the event. The final match against Madras resulted in a close defeat.
Strathmore U18s at Lathallan 7s:
Jordan Rae, Mark McQueen, Jamie Faulkner, Matthew Burgess, Struan Robertson, Cameron Stewart, Fergus Mitchell, Andrew Coupar, Anthony Franco, Calum Campbell.

Strathmore U18s 7s squad were invited to the prestigious Glasgow 7s World Series Event and Festival of Rugby . Playing in front of the huge crowd in their final competition as a group of players together, they played with pride, passion and plenty skill to really place Strathmore on the map. Their first game was against Scottish Champions Ayr – they pushed them close and only a late try by Ayr secured the win for Ayr. The second game against a strong Dumfries side saw Strathmore drive home a powerful victory using their key players to good effect as well as the width of the pitch. Their next game was a semi-final against Livingston which saw Strathmore score four storming tries to secure the bowl final place. The team lost Jordan Rae to injury in this game.
The Bowl final was a tense affair and incredibly close with Strathmore losing to Ellon by just two points losing Matthew Burgess to injury during the play. Strathmore played very well and pushed Ellon all the way but in wasn’t to be.

For their 7s circuit record over the past few weeks --- Played 15 7s games over three tournaments – winning 10 losing 5.

This was the final chapter for this U18 squad of players many of whom have stuck together for over 10 consecutive years – an incredible achievement. Their time together has witnessed some memorable moments, real achievements and a love of the game. The journey has developed a level of rugby which allowed the players to play the best in the country, regularly, and be competitive.

Coaches Colin Robertson and Les Coupar, along with U18 Organiser Yvonne Robertson, have helped the boys over the past 10 years and would like to thank them and wish them all the best for the future.