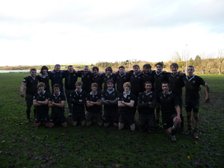 
The powerful Strathmore U18s played the well drilled Grangemouth side at Forfar on Saturday. In a well matched and close encounter, Strathmore showed outstanding team spirit and determination to win the game in the last 3 minutes of play with a try from captain Ewen Hart following powerful driving play from the pack after "pinching" a lineout close to the Grangemouth line.

The crowd were on tender hooks in the closing stages as Strathmore continued to dominate field position from excellent handling, support play and the outstanding kicking from hand performance from Struan Robertson. This was a strong team performance from Strathmore against a bigger and older Grangemouth side that have themselves been winning most games. However, the Strathie 18s way of playing, and pressurising, is now becoming a regular feature as they build consistency into their performance. The scrum was in strong form, driving Grangemouth back, with the front powerhouses of Kevin Hood, Josh Forbes, Ben Fotheringham and Daniel Cashley giving their opponents a torrid time. This, allied to outstanding defence and real quality in keeping the ball, set the tone for the match.
The boot of Mark McQueen knocked over 3 excellent penalties to ensure the scoreboard ticked over, teeing the game up for the Strathies' final attack to win the game.