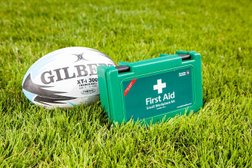 Sudbury secured another five point win on the road against Woodford but it was not their finest performance against the second from bottom team.

Woodford were forced to move the fixture from their home ground due to the condition of their pitch and the impending bad weather forecast for Saturday, Eton Manor had an all-weather pitch available so the game was rearranged with a one o’clock kick off. Sudbury traditionally have a poor record on plastic pitches recording only one win to date and added to the extreme conditions could be part of the reason for the lacklustre performance.
Strong winds and light driving rain prevailed throughout the afternoon and Woodford immediately got their big pack into the action with three scrums in the first five minutes scoring and converting from the third on the Sudbury five metre line. Sudbury replied when from a scrum mid-way in the Woodford half Frazer Becket took the ball from the back of the scrum to make the initial metres and put Shaun Smith clear down the right wing after ten minutes. Woodford continued to pick and drive and Sudbury was falling foul of the referee who constantly penalised them offside but eventually turned his attention to Woodford who received a yellow for the same offence. Smith scored a second try from a penalty lineout on the left and the ball passed through the backs across the park to the right for the touchdown, this time Sam Rust was successful with the kick with thirty five played.
Things went downhill for Sudbury when they received two yellow cards in quick succession, one for an offside decision as Sudbury defended their line as the Woodford forwards mounted and sustained a major offensive on the Blues line. And the second for a high tackle by the shortest guy on the pitch which resulted in a penalty try as half time was called.
In the second half Woodford used the wind to greater effect than Sudbury had in the first but the deep kicks did allow Sudbury to run back in possession but their handling was a bit lax at the contact.
Woodford extended their lead to nineteen- twelve after more pressure from the forwards but Sudbury continued to battle on, Henry Cowling made the initial break mid-way in the Woodford half for captain Jake Thurlow to finish. As the half progressed the Woodford pack became less effective and started to buckle at the scrums. Jonny Taylor out ran the defence down the wing to score wide on the left, then late in the half Sam Bixby came on to add new impetus to the pack. Woodford regained the lead with a well struck penalty but a converted try by Sudbury sealed the win for Sudbury in the last few minutes of the game. Woodford mounted another concerted attack in the remaining minutes but the Sudbury defence held firm and eventually cleared their lines to touch to end the game.