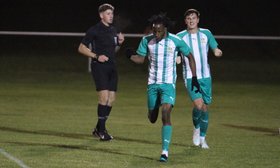 The game started brightly with us moving the ball forward and committing numbers. On 8 minutes Arlie opened the scoring by rounding the keeper and flicking it in to the far post. 1-0

Welling Town equalised 9 minutes later after a quick free kick caught out our defence. A cross was met with a bullet header 1-1

The equaliser spurred us on and Just before the half hour mark we broke with Conor and Jacob linking up. Jacob received on his left foot, shifted to his right and first past the Welling keeper 2-1.

In the second half Welling Town made changes tried to play on the front foot. We managed to break the press and a well worked move found Neil Spencer at the far post and the winger hit the back of the net from a tight ankle. 4-1.

With half an hour left to go the game was effectively won. Both sides had chances with the Welling Town keeper pulling off 2 very good saves from Billy and Arlie.

MOTM - Theo White. Dictated tempo from the middle of the pitch